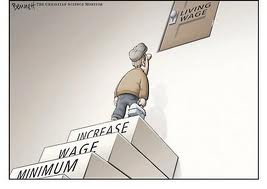 THE Japanese Trade Union Confederation (JTUC- Rengo) will be pushing employers to give at least a one per cent rise in basic pay during this year’s spring wage offensive.

And workers employed in smaller firms or who are non-regular or contract workers ought to be given a 2 per cent rise, said Rengo president Nobuaki Koga yesterday.

The recommended increases appear modest by some standards, but they come after years of deflation and economic stagnation in Japan, during which time workers have often had to settle for wage freezes in order to keep their jobs; some have had pay cuts.

Mr Koga told the Foreign Correspondents’ Club of Japan in Tokyo during a briefing that this was an opportune time for Rengo to negotiate its pay demands, given that the Japanese economy was turning around and an end to deflation was in sight.