Toyota to close: Thousands of jobs to go as carmaker closes Australian plants by 2017 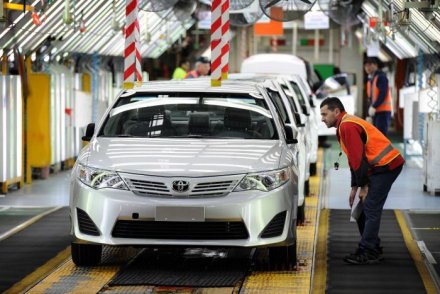 Toyota has made the “heart-breaking” announcement that it will stop making cars in Australia in 2017, bringing an end to the nation’s car manufacturing sector.

Around 2,500 Toyota workers will lose their jobs, while the loss of the wider automotive industry will put tens of thousands more jobs at risk.

“To now have to break the news… to the many people who have supported our production for many years is most regretful for Toyota and for me personally, simply heartbreaking,” the Tokyo-based Mr Toyoda told a media conference.

Mr Yasuda added in a statement: “This is devastating news for all of our employees who have dedicated their lives to the company during the past 50 years.”

He also cited increased competitiveness due to current and future free trade agreements as factors that have made it “not viable” to continue making cars.

“We did everything that we could to transform our business, but the reality is that there are too many factors beyond our control that make it unviable to build cars in Australia,” Mr Yasuda said.

“Although the company has made profits in the past, our manufacturing operations have continued to be loss making despite our best efforts.”

The Australian Manufacturing Workers Union says the decision is devastating and could cause an economic recession.

“This decision will see thousands of jobs exit Australia – not only at Toyota directly but all the way down the supply chain,” national AMWU vehicle secretary Dave Smith said in a statement.

“The magnitude of this decision in the community cannot be underestimated.

“We are looking at a potential recession all along the south-eastern seaboard.”

The Australian Council of Trade Unions has warned the decision could cost as many as 50,000 jobs and wipe $21 billion from the economy as the impact rolls through the associated components sector.

“The car industry has died under the Abbott government – it’s a disgrace,” he said.

Victorian Premier Denis Napthine released a statement saying he was “extremely disappointed” by Toyota’s “sudden decision” and saying the state would be asking for federal assistance to deal with the impact of the job losses.

“[I] would clearly have preferred to have had the opportunity to work through these issues with Toyota and the Federal Government,” he said.

Industry Minister Ian Macfarlane says he is disappointed but recognises Toyota had a business decision to make.

“I always felt that if we were given the time we could put in place a plan to ensure that Toyota did continue.

“Its situation was entirely different to that of Holden and Ford – Toyota was exporting more than half its production.”

Prime Minister Tony Abbott said “nothing we say or do can limit the devastation that so many people will feel at this point”.

VIDEO: ‘Dark days’ ahead for workers as Toyota closes(ABC News)

“There will be better days in the future.”

At a media doorstop after the Toyota announcement, Mr Abbott said he had a “brief conversation” with Toyota senior management earlier today.

That seemingly contradicts a statement the Prime Minister made in a press conference just before the Toyota decision came to light that he did not “have any knowledge of any major announcement at this time”.

In December, following Holden’s decision to stop making cars in Australia in 2017, Toyota had warned that it was facing “unprecedented pressure” on its ability to continue.

At the time Mr Abbott ruled out giving the Japanese carmaker any extra taxpayers’ money.

He said the Federal Government wanted “Toyota to continue” and revealed he had personally spoken to Mr Yasuda.

Holden announced in early December that it would stop making cars in Australia by 2017 due to a “perfect storm” of poor economic conditions.

Its decision will put 2,900 Holden employees out of work – 1,600 from the manufacturing plant in South Australia and 1,300 in Victoria.

Ford announced early last year, when Labor was in government, that it would stop making cars in Australia by 2016.