The future of Thai labour amid negative factors 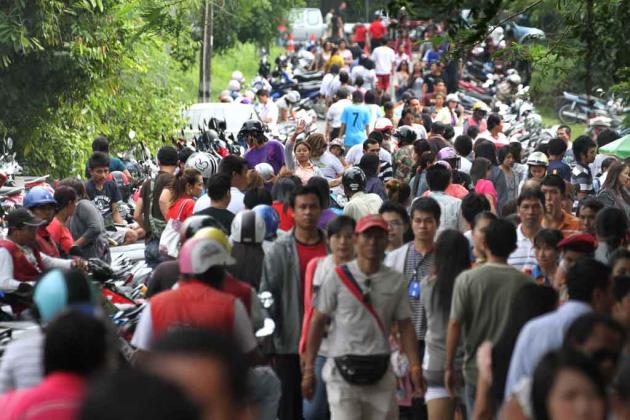 The future of Thai labour amid negative factors

The Thailand Development Research Institute (TDRI) is looking beyond the here and now to warn labourers about the effects of economic problems and the prolonged political crisis while also warning that unemployment among university graduates may continue to rise.

The TDRI said the prolonged and unresolved political situation had increasingly inflamed other issues in society and must be solved soon, especially those directly and indirectly affecting labourers.

Dr Yongyuth Chalamwong, TDRI’s research director for labour, said that the economic problems were due to several factors derived from exports, domestic consumption and the government’s expenditure during its transitory period.

As a result, it is expected economic growth slowed down in the first quarter but may gradually recover in the second, third and fourth quarters, Yongyuth said.

The macroeconomist said that if the political problems were quickly resolved, the spillover effects would not be so severe since Thailand still enjoyed a low unemployment rate while the labour market structure focused at the lower level of the workforce, which was mostly made up of foreign workers.

The labour market fluctuation was likely to absorb unemployment at the lower level, whereas middle-level labour still lacked technicians.

There was an over supply of people armed with bachelor degrees and this caused consistent unemployment.

Overall, the lower-level labour shortage problem would be lessened but the unemployment rate at the higher level would intensely increase.

It is predicted that the gross domestic product this year would increase only 3-4 per cent. Theoretically, if GDP is less than 4 per cent, the unemployment rate may rise by more than 1 per cent – from 0.7-0.8%.

Yongyuth said that if the current problems continued for six more months or a year, the effects on the labour sector would be more apparent.

That would particularly be the case for sensitive production industries, manufacturing, service and especially assembly, because they intensely absorb more labour. The assembly industry might be severely affected.

Yongyuth said that one of the most apprehensive problems expected to develop in the latter half of the year and next year were the effects from the political factors.

These effects might deter investors and slow down new investments while investments might be moved to other countries and production bases quickly shifted, causing effects to labour, especially in the electric and electronics-assembly industries that absorb between 300,000-400,000 labourers.

Yongyuth said that on the other hand, motor vehicle and parts manufacturing, or the larger industries, would not be hit as hard due to them having networks or production bases in various countries while their marketing networks could transfer products to demanding markets.

You could say that the crisis of one industry could create good results for another industry because labour could be easily transferred.

Yongyuth said the service sector, which absorbed labour of different kinds and was sensitive to the stability of the government, would be rapidly affected. If the situation was prolonged, the effects would multiplied and would hit service labour.

Summing up the overall labour situation in 2014, Yongyuth said a labour shortage still existed and the unemployment rate was no different from last year.

The effects from the political situation would result in lower economic growth than expected, impacting on businesses, particularly the small and medium-sized enterprises, and they would need to quickly adjust. It would also slow down the new employment rate and limit hiring.

The most affected labour group would be new labourers entering the market in the second quarter, especially bachelor degree graduates, who were consistently unemployed every year.

Yongyuth said that fluctuations in the lahbour market could be sharp and only highly-skilled workers were in demand while the political problems remain and the workforce should prepare itself for inevitable fluctuations, a possible unemployment spike and income losses.

At the same time, new labourers also needed to acquire more knowledge while waiting for the market to recover or switch to a more independent profession if they could no longer wait.