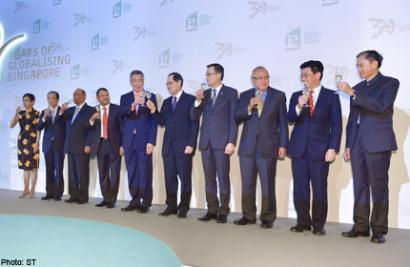 SINGAPORE – It is a limitation for Singapore that its citizens are so reluctant to be posted overseas, which in turn constrains their progress in multinational companies, said Prime Minister Lee Hsien Loong at trade agency IE Singapore’s 30th anniversary dinner.

“Singaporeans don’t always go as readily as their employers would like them to,” he said in a dialogue with about 600 business leaders at The Ritz-Carlton, Millenia Singapore hotel last night.

“It’s a limitation for us. If we are not able to do that, I think it constrains our potential in the world,” Mr Lee noted in response to a question on the issue.

Common reasons for this reluctance include children’s education and a spouse’s career, which make it hard to uproot.

However, Mr Lee pointed out that a willingness to go overseas, even to difficult places, is necessary if one wants to reach high positions and lead a multinational corporation (MNC).

He said: “You must have that experience not just of Singapore, not even just of South-east Asia, but also of being deployed to headquarters… being familiar with another continent.

“With that background you are ready and prepared, you can be the CEO of an MNC.”

He added: “We need to have people who are willing to do that… we should have that spark to go wherever the opportunities are, and some of them will be hardship postings.”

He was also asked about the issue of growing Singapore’s education sector and exporting its brand of education overseas.

He said there was some potential to do so but it was not easy to pull off.

He noted that the Australians have made a business out of it but said: “In our case, we have set up our own institutions mainly because we want to provide for our own economic needs.”

While there are foreign students studying in public schools and universities, Mr Lee said there was a need to watch the mix “because we want to keep them as Singaporean institutions”.

About 15 per cent of students in the universities are foreign, though he added that “this might come down a little bit over time”.