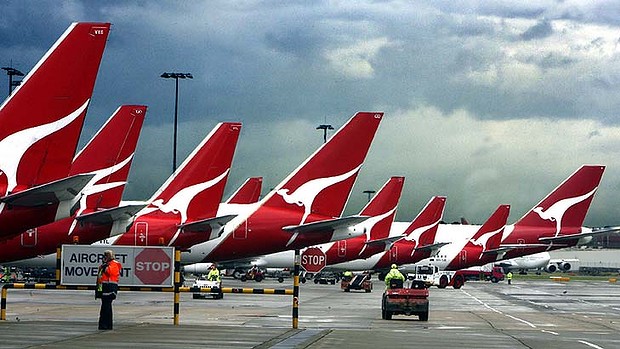 Qantas will let go of 26 managers over the coming months as part of a what it describes in a leaked internal document as ”major changes” to the make up of its senior leadership team.

In the seven-page memo to staff, the airline reveals the extent of the changes to roles across the airline group, including its premium domestic and international divisions, and budget offshoot Jetstar.

It is the most detailed breakdown of the changes to its leadership team since Qantas confirmed a month ago that it will axe 5000 jobs as part of efforts to strip out $2 billion in costs from the business over the next three years.

However, the top echelon of Qantas’s most senior management has so far escaped the deep cost cutting, despite a muted investor response and the airline failing to convince the Abbott government to agree to its pleas for a debt guarantee or an unsecured $3 billion loan.

The leaked document shows Qantas’ struggling international division will consolidate the roles of some of its regional general managers, resulting in some overseeing a larger number of countries.

Departures include Daniele Da-Rin, who previously managed Western Europe for Qantas, Maxine Jacquet, the head of alliances, and Chadi Chalhoub, the head of international airports.

Qantas’ domestic business will also cease having regional general managers, which will result in the departure of Ian Gay, Peter Collins, Allan Williams, Ken Ryan and Rina Karabesinis over the next few months.

However, the large shake up of the airline will result in some managers gaining a wider brief, including Qantas Freight boss Alison Webster who will also take responsibility for the airline’s catering operations.

”Qantas Catering, as a shared resource of the whole of the airline, will report to Alison Webster in the International business,” the memo said.

Ms Webster was named the head of Qantas Freight in January, having previously been the executive manager of customer experience for Qantas International.

Qantas is removing some duplication of roles in its international and domestic businesses such as security heads.

The 26 managers to go include the previously confirmed departures of Qantas Domestic chief operating officer Matt Lee following the airline’s decision to opt for a single chief operating officer for its domestic and international operations. That job has fallen to Jetstar executive Andrew David, a former boss of Tigerair Australia.

The other departures include a number of senior human resources managers.

Qantas has outlined to unions how it intends to shed about 2500 jobs, which include 1500 from mostly back-office roles and 300 from aircraft maintenance.

Qantas chief executive Alan Joyce has said the remaining 2500 job cuts would be the result of ”fuel, fleet simplification and efficiencies”, citing the retirement of Qantas’ Boeing 767 fleet by early next year.