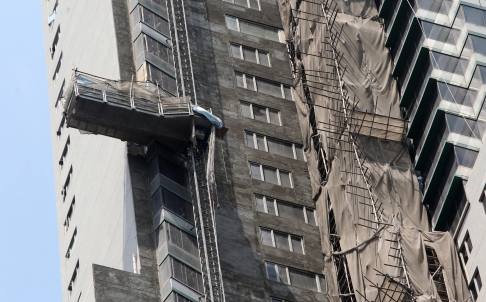 The Labour Department has stepped up prosecutions against occupational hazards in the workplace after 10 people died in industrial accidents during the first three months of the year.

In a blog post yesterday, Secretary for Labour and Welfare Matthew Cheung Kin-chung described the high number of deaths as “unusual in recent years”.

Of the 10 deaths, four involved people working at heights, while three were related to workers hoisting heavy objects.

In the most recent incident, two workers – a man and a woman – fell to their deaths on March 25 from the 66-storey Tregunter Tower 3 in Mid-Levels.

Cheung wrote that more patrols by the department to check on high-risk activities in the workplace had led to an increase in prosecutions. It had sent out 138 suspension notices to stop work at sites and would initiate prosecutions in 167 cases.

The minister was vague about whether punishments would be increased for those found guilty in such cases.

“The Labour Department will provide sufficient information to the court as reference for its decisions,” he wrote.

Unionist lawmaker Lee Cheuk-yan said the number of deaths in the first quarter could be the highest in five years. He said tight schedules for completion of projects put workers at higher risk.

“When construction companies rush to finish work, safety is no longer a priority,” he said.

It was necessary to change the culture of impossible schedules and deploy more safety officers to bigger worksites, he said.

Cheung added that fines for deadly accidents had increased.

The number of deadly construction accidents ranged between nine and 24 from 2009 to 2013. There were 22 deaths last year. The department began providing figures on workplace accidents on its website in 2003.