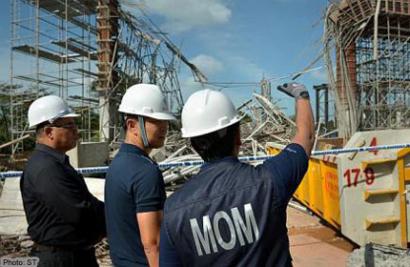 THE Ministry of Manpower (MOM) will step up safety enforcement measures on several fronts, in the wake of a spike in construction site deaths.

First, it will review its demerit point system, said Senior Parliamentary Secretary for Manpower Hawazi Daipi in Parliament on Monday.

Contractors that fail to improve their safety records can be barred from hiring foreign workers, he said.

Details of the review will be announced by the middle of this year.

The MOM will also ask the courts to hand out deterrent sentences, including jail time, for serious breaches of the law, Mr Hawazi warned.

He said: “We will… ask for custodial sentences on individuals who have blatantly disregarded the law and press for maximum sentencing as allowed under the Workplace Safety and Health Act for egregious cases.”

In severe cases, employers who failed in their duties have been fined up to $200,000, he said.

Those who have been ordered to stop work because of safety breaches will also find it harder to resume their operations, unless the safety lapses are corrected.

Finally, the scope of a ministry watch list for firms with poor safety records will also be expanded, to ensure closer scrutiny on these firms.

Mr Hawazi announced these moves in response to questions from Ms Foo Mee Har (West Coast GRC) and Nominated MP Eugene Tan, who wanted to know what MOM was doing to enhance safety in the wake of a spate of workplace accidents.

There were 22 construction deaths between July and December last year, which was double the fatalities in the first half of the year. Eight workers died in construction sites last month.

Mr Hawazi also disclosed that his ministry found 114 safety breaches at 89 construction sites in the first two weeks of this year.

Seven construction sites were ordered to stop work, 45 fines were handed out and 69 firms were given official notices that they had not complied with workplace safety rules.

Besides these moves, Mr Hawazi said that a construction firm’s safety record will determine whether it gets government contracts.

But he acknowledged that it will take time for firms to accept that safety measures can also affect their productivity.

The moves taken by the ministry will not stop workplace deaths unless the industry comes onboard, stressed Mr Hawazi, adding: “Workplace safety and health is everyone’s responsibility.”