Labour force will start to plateau in 2020: Tan Chuan-Jin 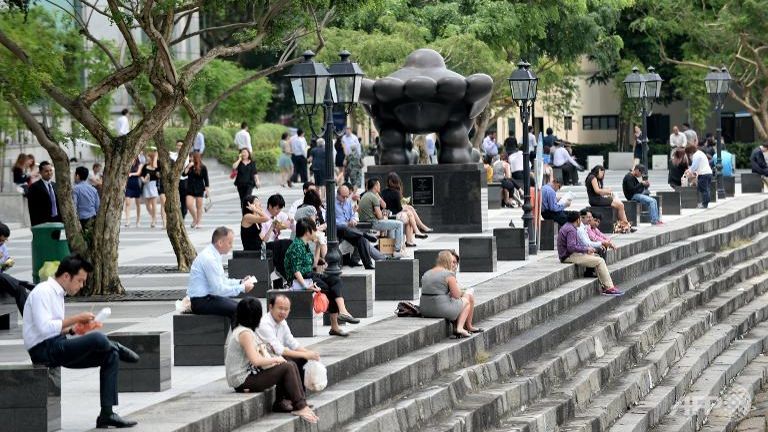 Labour force will start to plateau in 2020: Tan Chuan-Jin

SINGAPORE: In the short to medium term, the labour market outlook remains positive, but things would not be as rosy in the long term, said Manpower Minister Tan Chuan-Jin.

On the labour front, the Manpower Minister said it had been a relatively good year for Singapore, with positive business sentiments and an employment rate close to 80 per cent. The tight labour market and efforts to improve wages have also meant pay increases for those in the bottom 20th percentile.

The local labour force participation rate has also gone up thanks to more older workers and women back at work. But the Minister feels this may have negated efforts to up productivity.

“So they have been looking at some ways to cope with that. One of which is actually to enhance employment terms, which in large part I think has resulted in the growth of wages as well. Terms of employment, more flexible work arrangements, we’re going to see some of that coming in which is a good thing for the work scene.

“But what it means is that I (employers) am able to find more bodies coming in to do the things I need to do instead of perhaps really revamping the way I do business and becoming a lot more productive. So ironically, while it’s a positive sign having a better labour force participation, high employment numbers overall may actually negate some of that push towards that drive to productivity.”

The reality is the pool of local workers will start to shrink in time, though Mr Tan said that is just demographics.

“The baby boomer generation are going to begin to retire,” he said. “Even with the extension of the retirement age and the Re-employment Act kicking in and so on, you will begin to see more of them leaving the workforce. Correspondingly, because of lower birth rates, the workforce entering the job market is also beginning to decline.”

“So what you will see in the next few years is these numbers declining. So even with Labour Force Participation measures still being in place, still being positive, that pool of labour force coming back will actually begin to reduce. So in the Population White Paper, we actually talk about how when you hit 2020s onwards, you will begin to see the labour force plateauing.”

Hence, the critical need to power on with productivity measures such as automation, re-engineering processes and re-skilling the workforce. Sectors which the Government wants to focus on include construction, F&B and retail. Mr Tan said “the time to change is now”.

“So companies who will still have that underlying demand have a couple of choices,” said the Manpower Minister. “One, they literally have to restructure and change the way they do things so that they are manpower leaner. The emphasis has always been being leaner in terms of manpower needs. It’s not just about having fewer foreign workers. It’s about being leaner in operations because the reality is even your own local labour market is going to be small.

“So at the end of it what’s the net impact? At the company level, I think it’s about survival. It will be about whether they are able to transit. I think we will see more consolidation. You might see more mergers between companies. We are beginning to see some of that happening today. You probably would see more of that happening.

“Offshoring perhaps might accelerate slightly more so there’s going to be a lot more real pressure being placed on the companies. But at the macro level, what’s the impact on the economy? Well, I think if we are not able to embrace the improvement in productivity and if you have to continue to keep your growth of foreign labour moderate, then it will have an impact on your headline GDP growth numbers.”

The labour market will remain tight as the Government continues to moderate the growth of foreign labour, so it is inevitable that labour intensive industries will need to restructure their processes. Mr Tan said businesses need to remain competitive for a healthy economy, better jobs and better pay for Singaporeans.