Free Wi-Fi and computers for construction workers at worksites 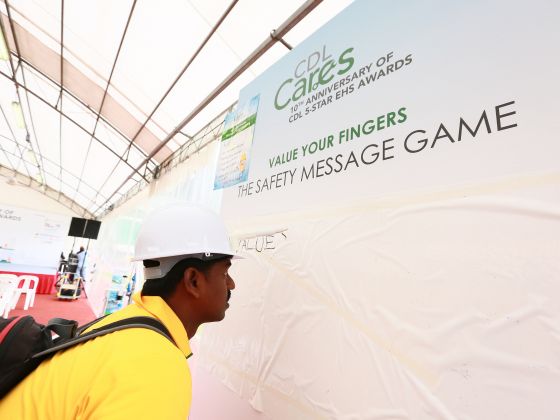 Free Wi-Fi and computers for construction workers at worksites

The initiative was announced by CDL’s group general manager at an event commemorating the 10th anniversary of CDL’s 5-Star Environmental, Health and Safety (EHS) Awards and meant to enable workers to stay connected with their family back home as well as “an avenue for recreation and learning”.

The event saw Minister for Manpower Tan Chuan-Jin as the guest-of-honour presenting awards to winners of the various categories in the 5-Star EHS Awards as well as the champions for the football tournament. An inaugural award called the Safe Worker Award was also presented to 14 exemplary individuals to honour their devotion towards ensuring workers’ welfare.

In his speech, Mr Tan expressed his delight at CDL’s contribution to the overall improvement in workers’ standard of living.

“I am happy that CDL’s contractors have pledged to commit to providing good living and working conditions for their foreign worker. I hope other developers and contractors will follow suit and provide their workers with the assurance that their well-bring will be taken care of,” said Mr Tan.

Deputy chairman of CDL, Mr Kwek Leng Joo described construction workers as “unsung heroes” and explained the role in which they play as the foundation of Singapore’s building industry.

“Their hard work has to a large extent enabled us to create a better place for everyone to live, work and play,“ he said.

He added that the creation of a “better, happier and healthier workplace” must be a continual process on top of vigilance in safety at the worksites.