Easier for cleaning firms to send staff for training: Balakrishnan 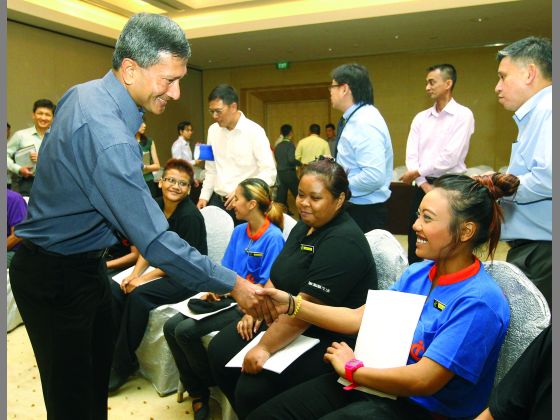 Easier for cleaning firms to send staff for training: Balakrishnan

SINGAPORE — Cleaning companies will be hard-pressed to find an excuse for not providing training for their workers — part of licensing requirements to kick in from Sept 1 — as monetary subsidies and accessibility to such courses are being catered for, said Minister for the Environment and Water Resources Vivian Balakrishnan yesterday.

With the Singapore Workforce Development Agency (WDA) announcing that up to 4,500 workers could be trained each month from now till August, Dr Balakrishnan said firms should no longer face difficulties in sending their workers for training, which had been their gripe.

Stressing that the Government was standing firm on the training requirements under the licensing criteria, Dr Balakrishnan said: “No company that is serious about this, that actually wants to get their workers trained, will have a barrier … We will overcome the hurdles, this assurance I can give you.”

Noting that the Government is providing more than 90 per cent of training subsidies, he added: “I am not looking at tweaking the requirements. I am looking at making it more convenient … we will come to your site, schedule (it) at a timing convenient for you … so that is not an excuse for (workers) not getting training.”

As part of the mandatory licensing regime, at least half of a cleaning firm’s staff must be trained in at least one module in the WDA’s Workforce Skills Qualifications framework. Firms that subsequently renew their licences must ensure all their staff have received training.

The minister’s comments come as the cleaning sector, with an estimated 900 companies, faces a race against time to fulfil the training aspect of the licensing criteria by September.

As of yesterday, the National Environment Agency has issued 18 licences to companies that employ about 4,000 workers, of whom 70 per cent have been trained. Another 116 applications out of 134 received are being processed.

Official statistics showed the majority of the applicants so far are small and mid-sized firms, reflecting previously reported sentiments that larger companies found it challenging to send their staff for training due to the manpower crunch.

Cleaning companies interviewed yesterday welcomed easy access to training courses but pointed out logistical difficulties. Among them was Twin Creation, whose general manager Ryna Zhao said the company sent 14 of its employees for training yesterday but had to hire three part-timers to cover their duties.

UE Managed Solutions Singapore’s Wong Sioe Fa proposed easing training requirements for licence renewals, adding that many firms would not be able to have all their workers trained due to the high attrition rate.

The mandatory licencing for cleaning businesses is an effort to shake up an industry plagued by stagnant wages, low productivity and poor working conditions. For instance, the median gross monthly wage for cleaners was about S$850.

Under the licensing requirements, companies must provide written employment contracts and training, pay an entry-level monthly salary of S$1,000 and implement the Progressive Wage Model so that workers are paid increments in tandem with skills upgrading.

Dr Balakrishnan also said yesterday that he expects the cleaning industry to undergo restructuring over the next two years and that the “several hundred” firms that eventually remain would be those committed to raising productivity and investing in their workers.