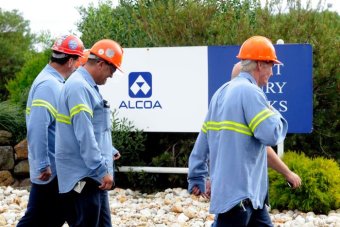 The Federal Government says it is considering whether it needs to “do more” to help workers in Geelong, after aluminium producer Alcoa announced it will close its Point Henry smelter and two rolling mills.

Almost 1,000 people will lose their jobs when the facilities close later this year.

The Geelong smelter, where 500 people work, will close in August and the rolling mills at Geelong and Yennora in New South Wales, which employ 480 people, will shut down at the end of this year.

He says Alcoa’s announcement will be a “very heavy blow” to the Geelong area, particularly following the announcement last year from Ford that it will close in 2016.

“This is an extraordinarily difficult time,” Mr Macfarlane said.

“We are going to look at whether or not we need to do more, particularly in the Geelong area.”

The Minister said he was considering short-term training options for sacked workers and supporting infrastructure projects in Victoria.

He also said workers in the region would already receive help under a $67 million jobs assistance package announced by the previous Labor government to help Ford workers, and the $60 million announced by the Abbott Government for Victoria and South Australia after Holden announced it would end operations in 2017.

VIDEO: Alcoa workers ‘are building houses because they thought their jobs were secure’ (ABC News)

“We’ll be looking at whether or not we need to revise that amount of funding,” Mr Macfarlane said.

“And whether or not we should add a prominent person from the Geelong area to assist the panel in making sure that Geelong gets its share of that money as part of the transition.”

But he added that “just throwing money at a problem doesn’t solve the situation”.

“We want to put in place something that is sound and will produce a long-term result,” he said.

The Minister blamed Alcoa’s decision on an economy-wide transition but also cited the carbon tax and worker’s conditions.

“This smelter has continued with a workplace arrangement which is now out of step with other aluminium smelters in Australia, specifically [Tasmania’s] Bell Bay, where the workers have opted for job security and productivity ahead of continued changes to the award and falls in overall productivity,” he said.

Dr Napthine says he will ask for federal funding to help workers affected by the Alcoa closure.

“We will make representations to the Federal Government to put funding up to assist in the continued diversification of jobs and opportunities in Geelong,” he said.

The former federal Labor government set up the Geelong Innovation and Investment Fund last year after Ford announced it was closing.

Now in Opposition, Labor is calling for at least $50 million to be added to that to help workers get new jobs.

Opposition Leader Bill Shorten says Geelong has not seen job losses of this size before.

“This is an industrial asteroid which has hit Geelong,” Mr Shorten said.

“Geelong can recover but it’ll only recover if governments – state and federal – get behind Geelong and the workforce.

Making the announcement, Alcoa said a comprehensive review of the 50-year-old smelter says it has no prospect of becoming financially viable.

The company is closing the rolling mills because of excess capacity.

“We recognise how deeply this decision impacts employees at the affected facilities and we [are] committed to supporting them through this transition,” company chief executive officer Klaus Kleinfeld said.

“Despite the hard work of the local teams, these assets are no longer competitive and are not financially sustainable today or into the future.”

After the announcement, Treasurer Joe Hockey said Alcoa’s decision is disappointing but it was predictable because the company knew in 2012 that the plant was not financially viable.

“This is one of a number of businesses that will pass, but many other businesses will open,” he said.

Australian Workers Union (AWU) national secretary Paul Howes says there is nothing the Federal Government could have done to stop Alcoa from closing the facilities.

“This is not the fault of the Government. Let’s be blunt [about] that. There is nothing the Government could have done to stop this announcement,” he said.