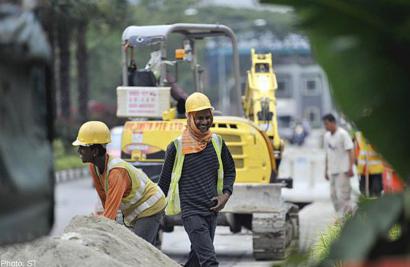 He did not complain at first, despite having proof of his low wages – unlike many other employers of foreign workers, his issued payslips.

He held back because he had borrowed heavily to pay for recruitment fees and did not want to be repatriated.

Eventually, he lodged a complaint days before his contract was due to end, fearing he might be sent home without his dues being settled.

Complaints to the ministry about work-related abuses are also low. It helped 7,000 foreign workers last year – less than 1 per cent of the 700,000 work permit holders here.

But these numbers may not reflect the true picture on the ground.

While covering foreign worker issues, I have been told time and again by workers and their advocates that despite grave abuses, many workers will not complain so long as the power balance between employer and employee remains skewed in the employer’s favour. Some policies need tweaking to level the playing field.

First, the ministry could compel all big and medium-sized companies to issue itemised payslips, clearly showing basic and overtime pay, hours worked and deductions, if any. Itemisation is important. I have seen hastily scrawled figures on the backs of used envelopes that currently pass as “payslips”. This needs to change.

A move to mandate payslips was deferred for all companies recently, after feedback that small and medium-sized enterprises needed more time to implement proper payroll systems.

An ongoing survey by workers’ group Transient Workers Count Too (TWC2) shows that one in 10 claimed they were underpaid or not paid at all in the previous month. That could translate into tens of thousands of workers at any given time.

Itemised payslips – together with electronic payments – would give workers proof of being underpaid and empower them to complain.

Some workers say that on pay day, they are passed cash stuffed in envelopes and the amounts are occasionally far less than what they are owed.

Mandating electronic transfers of salary could help overcome this problem. The ministry says some workers may prefer the convenience of cash payments.

This could be easily catered for by having an opt-out feature.

But the main reason workers do not complain is that doing so can cost them their job.

The employer can unilaterally cancel the work permit and send the worker home once the complaint is resolved and dues are paid.

For workers who still have debts to repay, complaining is the last option.

A survey of 104 Bangladeshi workers showed that each paid an average of $6,500 to get here and it took up to 17months to repay their loans. Anyone sent home within his first year returns to big debts.

TWC2 advocates have suggested that a worker who leaves his job – whether he is sacked or resigns – should be allowed 60 days to remain in Singapore and find another.

A worker who feels unfairly treated or abused will more readily speak up and complain, if he is assured that he is not at risk of being packed off home.

Such a move could also help raise workers’ wages and hurt the bad eggs, such as Mr Iqbel’s employer, who profit by undercutting more ethical competitors who know it is morally wrong to pay a manual worker $1.50 an hour.

Employers’ interests could be protected by proscribing mass resignations, to prevent large-scale poaching by competitors.

Significantly, Singapore allows foreign maids to transfer to another employer in case of disputes with an existing employer.

Also, as part of a little-known scheme, the Manpower Ministry already allows work permit holders to change jobs on a case-by-case basis.

It is unclear how many have been allowed to do so, but there were two cases recently of workers being given 14 days to look for a job after their permits were cancelled when their employer defaulted on levy payments.

Finally, there is the matter of wages.

In the absence of publicly available surveys of foreign workers’ wages, it is hard to know how many workers earn as little as Mr Iqbel.

The Sunday Times understands that the Bangladeshi and 14 of his compatriots were each owed an average of $9,500 in wages.

They eventually opted to settle privately with their employer and left Singapore.

Thanks in part to tireless negotiations by unions, the Government recently announced that it would introduce new laws to ensure that local cleaners would get at least $1,000 in wages. More productive and skilled workers can earn more.

Even as we applaud the move, it is time to discuss how blue-collar wages can be pulled up in the construction and marine sector too, where, as Mr Iqbel’s example shows, workers might be earning less than a third of what a cleaner gets, despite back-breaking manual labour.

Singaporeans have long clutched the moral fig leaf that it is okay to pay these foreigners a pittance because they spend the bulk of their salaries in their home countries, where the costs of living are far lower. Besides, they come willingly – and conventional wisdom has it that if they don’t like what they get, they can leave.

Such attitudes must change. Working hard at vital jobs that most locals will never deign to do, migrant workers have played a key part in Singapore’s economic success and deserve better – and fairer – returns.

It is time to evaluate whether it’s right to pay anyone $1.50 an hour for hard work – just because it’s legal and we can.