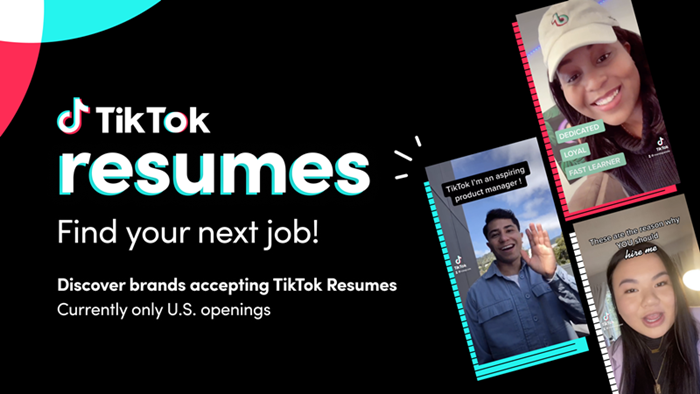 What do you think about creating a short video to apply for a job? In the era of digital revolution, video viewership has gained immense popularity, especially among mobile users. Tiktok, the social network known for short entertainment videos popular with young people, has grasped this growing trend with a new recruiting platform.

The video-sharing app recently launched a recruiting platform that allows users to respond to job offers with a short video rather than a traditional resume. AFP reports that the feature is called TikTok Resumes. The pilot programme began last Wednesday (July 7) and is limited to the US job market, and scheduled to last until July 31.

“We’re humbled to be able to partner with some of the world’s most admired and emerging brands as we pilot a new way for job seekers to showcase their experiences and skillsets in creative and authentic ways,” he added.

Recruiters can post their job offers on a dedicated site, and TikTokers can apply for a job by submitting a video and adding the hashtag #TikTokResumes to it.

“#CareerTok is already a thriving subculture on the platform,” Mr Tran said. “And we can’t wait to see how the community embraces TikTok Resumes and helps to reimagine recruiting and job discovery.”

Chipotle said it hopes this new initiative will help it recruit 15,000 additional employees it needs to meet demand.

“Due to a tight job market, Chipotle continues to experiment with new methods to meet potential candidates wherever they are,” the restaurant chain said in a statement.