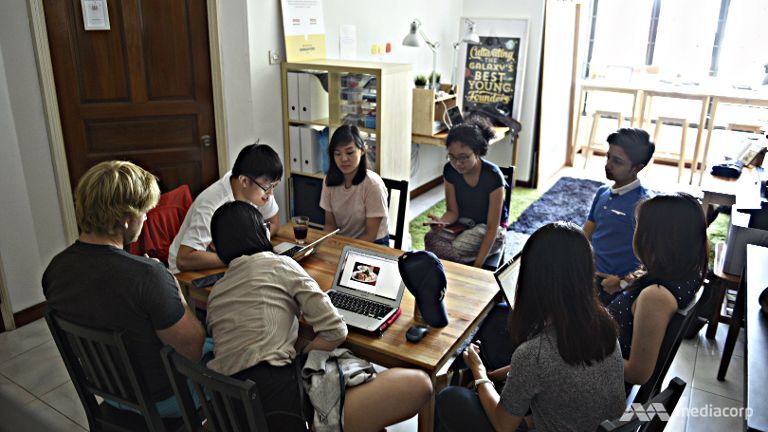 Co-workers having a meeting in ARC-II, a co-living space run by startup Reactor. (Photo: Linette Lim)

SINGAPORE: “You live in your office? Why?” This is the typical response 26 year-old Lim Weiyuan gets when he tells people where his home is.

Mr Lim, who is a co-founder at four year-old startup Reactor, has been living and working out of a condominium unit in East Coast with two colleagues for the last six months. A fourth member, Alex Foo, is due to move in permanently in June, while a fifth member, Puah Jing Wen, only sleeps over on occasion, when she works late.

In the day, the four Singaporeans – whose ages range from 21 to 27 – share the three-bedroom condominium unit with colleagues from a sister startup, Trabble. Come nightfall, Mr Lim and Trabble founder Low Jian Liang retreat to their bunk beds in the master bedroom, while Reactor co-founder Khairul Rusydi – who snores – is banished to a room of his own. The third bedroom hosts guests – usually fellow entrepreneurs from abroad – which helps to pay the rent.

“Most of my friends from overseas understand the idea of a ‘hacker house’, or a co-living space, and when they visit, they want to stay here. And they are mostly working in startups. It helps in bouncing off ideas,” said Mr Low.

Such living arrangements first took off among the startup communities in San Francisco and New York, and have spread to other cities with a vibrant startup ecosystem.

But in Singapore, Reactor’s home – named ARC-II, after comic book character Iron Man’s Arc Reactor – is believed to be the only functioning co-living space. It operates under the Urban Redevelopment Authority’s Home Office scheme, through which the owner, tenant or authorised occupier of a private residential property can run certain types of small-scale business out of the unit. Commercial co-living spaces that opened in the last couple of years – 13 and Techsquat – are now defunct, although Channel NewsAsia understands there are at least two new co-living spaces that will be established later this year. “We work where we sleep, and we can wake up in the middle of the night and start working,” said Mr Foo, a coder. Mr Low, who runs a travel-related chatbot app, concurs: “In the middle of the night, if I get a sudden epiphany, we’d start discussing. There are Post-Its all over the place and a giant whiteboard for us to note down ideas.”

Co-living is an extension of the co-working trend that is pervasive in startup communities, including Singapore. In a co-working arrangement, people who are self-employed or working for different employers share office space and common facilities in order to save costs and share ideas. Co-living takes that arrangement one step further – so people can work round the clock, if they want to.

“Overall, this is more cost-efficient, compared to standard offices that typically aren’t utilised over the weekends,” said Mr Rusydi, pointing out that ARC-II is also used as a casual meeting point for the various youth-led startups that Reactor is mentoring.

But the co-living arrangement only works if people want to work and live together, and their personalities and career goals are aligned, said the Reactor team.

“The reason why we want a space is we want to see each other more often. We find that working remotely doesn’t work out as well as if you have face-to-face interaction. You can’t build culture, you can’t build rapport without that interaction,” said Mr Lim.

“If you buy desk space, you’re not really building any kind of rapport with your team. Or you’re a solo-preneur, you can just work out of a coffee joint, so (paying to co-work or co-live) is a needless expense.” The living room in this three-bedroom condominium is a co-working space for startup Reactor and its affiliates. (Photo: Linette Lim)

Co-living has worked out well for Reactor because they feel they are more productive together, are able to work more flexible hours, and can cohere as a team. But this living arrangement is not for everyone.

“I like my own space. There are too many distractions in a co-working space, and I imagine it to be worse in a co-living space,” said Winnie Wu, a 29 year-old creative director.

“I like the idea if it is something the company can afford, and if it suits the lifestyle of my teammates,” said Keith Ng, co-founder of gamification platform Gametize. “But as you get older, it could get a little more uncomfortable, because you’d want more personal space.”

Mr Ng, 34, added that it may make more sense for members of the same team to co-live, rather than for individuals from different startups to come together and do that.

ARC-II advertises desks, beds, and rooms for rent on its website – ranging from S$29 a night for a dorm bed, to S$1000 a month for a private room. It is not currently hosting any external parties outside of the Reactor and Trabble teams, not for lack of demand, but for lack of supply.

Nearly all the desk space is taken up by the Reactor and Trabble teams. While there is co-living capacity for one more, it is not actively looking for tenants, and is quite selective about who gets to stay there.

Reactor is also first and foremost a startup involved in entrepreneurship training and mentorship. It works with schools to conduct workshops for students between the ages of 14 and 20. As such, the team is less concerned with monetising the space in ARC-II, or becoming an operator of a co-living space.

“If you ask me whether this place can be profitable or commercialised, it’s possible – given the number of enquiries we have, the number of people who are willing to pay,” said Mr Low.

“But we want to strike a balance between building a community and commercialising. Unless we find someone that we’re very close to, and we know them well enough, and they are looking for a space, we’re open to having them,” said Mr Low.

“I agree, there’s a filtering process,” said Mr Rusydi, adding that it was important to make sure that the people who share their space are the right fit.

Mr Rusydi is known as the house elf – or cleaning dictator to his flat mates. This community manager role – and the entire team effort in cultivating a sense of belong and shared responsibility – is seen as key to the viability and sustainability of the co-living space, said the Reactor team. An example of some of the house rules at ARC-II. (Photo: Linette Lim)

“If you want to co-live and co-work, and want people to pay for it, then there are certain expectations of each other and of the space,” said Mr Low.

“We share the responsibilities very evenly, when we feel that it’s dirty, we clean; when we use something, we wash up. And we have slightly more concrete rules for guests that come over,” said Mr Low.

Average monthly rents for the three-bedroom condominium unit that houses ARC-II come up to about S$3000. The Reactor team is able to cover these costs on their own, but acknowledged that it may not be viable for everyone.

“Most Singaporeans wouldn’t pay for space, as they live with their parents,” said Mr Lim.

He added: “And the locals who are in startups – they don’t have cash. Whatever money they are making, they are pumping back (into their business).” A shared room in ARC-II houses up to four, in two bunk beds. (Photo: Linette Lim)

Besides financial considerations, other observers pointed out other obstacles to the growth of the co-living trend in Singapore, including cultural and regulatory barriers.

“For such a living arrangement to take off, there has to be a mind-set change not only among the adults moving in but also from their parents,” said Associate Professor Ang Swee Hoon from the Department of Marketing at NUS Business School.

“Even if the young adults embrace this idea of co-living, parental objections may be strong to discourage them from taking part. Mind-set change takes a long time.”

Property analyst Ku Swee Yong said there are a number of regulations in place that deter co-living on a large-scale.

“Most apartments and HDB flats in Singapore are under 1000 square feet. There are few co-living companies who can find a large enough apartment or house that can be subdivided and yet be comfortable to all the tenants,” said the CEO of property firm Century 21 Singapore.

“Let’s not forget that URA/HDB has a guideline which prohibits (having) more than 8 residents for a three-bedroom unit, for example. And we also have a guideline which makes it illegal to lease a home for less than six months.”

“It will probably rise with time, once there are more precedents. Co-working spaces took a while to come in vogue; now there are a whole bunch of them,” he said.