Working hours: Get a Life

BERTRAND RUSSELL, the English philosopher, was not a fan of work. In his 1932 essay, “In Praise of Idleness”, he reckoned that if society were better managed the average person would only need to work four hours a day. Such a small working day would “entitle a man to the necessities and elementary comforts of life.” The rest of the day could be devoted to the pursuit of science, painting and writing.

Russell thought that technological advancement could free people from toil. John Maynard Keynes mooted a similar idea in a 1930 essay, “Economic possibilities for our grandchildren”, in which he reckoned people might need work no more than 15 hours per week by 2030.

But over 80 years after these speculations people seem to be working harder than ever. The Financial Times reports today that Workaholics Anonymous groups are taking off. Over the summer Bank of America faced intense criticism after a Stakhanovite intern died.

But data from the OECD, a club of rich countries, tell a more positive story. For the countries for which data are available the vast majority of people work fewer hours than they did in 1990: 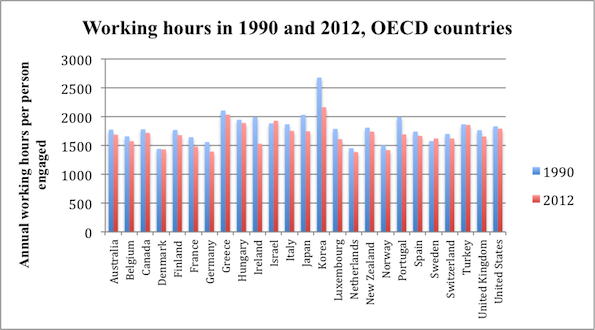 And it seems that more productive — and, consequently, better-paid — workers put in less time at the office. The graph below shows the relationship between productivity (GDP per hour worked) and annual working hours: 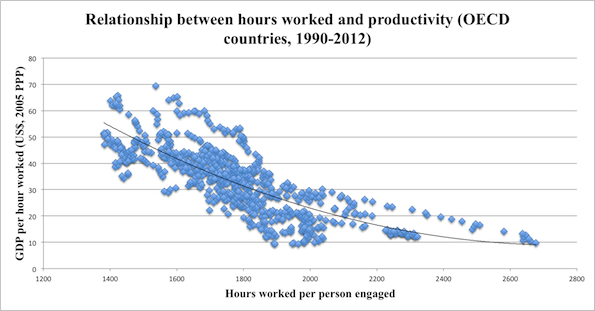 The Greeks are some of the most hardworking in the OECD, putting in over 2,000 hours a year on average. Germans, on the other hand, are comparative slackers, working about 1,400 hours each year. But German productivity is about 70% higher.

One important question concerns whether appetite for work actually diminishes as people earn more. There are countervailing effects. On the one hand, a higher wage raises the opportunity cost of leisure time and should lead people to work more. On the other hand, a higher income should lead a worker to consume more of the stuff he or she enjoys, which presumably includes leisure.

Some research shows that higher pay does not, on net, lead workers to do more. Rather, they may work less. A famous study by Colin Camerer and colleagues, which looked at taxi drivers, reached a controversial conclusion. The authors suggested that taxi drivers had a daily income “target”, and that:

When wages are high, drivers will reach their target more quickly and quit early; on low-wage days they will drive longer hours to reach the target.

Alternatively, the graph above might suggest that people who work fewer hours are more productive. This idea is not new. Adam Smith reckoned that

[T]he man who works so moderately as to be able to work constantly, not only preserves his health the longest, but in the course of the year, executes the greatest quantity of works.

There are aberrations, of course. Americans are relatively productive and work relatively long hours. And within the American labour force hours worked among the rich have risen while those of the poor have fallen.

But a paper released yesterday by the New Zealand Productivity Commission showed that even if you work more hours, you do not necessarily work better. The paper made envious comparisons between Kiwis and Australians—the latter group has more efficient workers.

So maybe we should be more self-critical about how much we work. Working less may make us more productive. And, as Russell argued, working less will guarantee “happiness and joy of life, instead of frayed nerves, weariness, and dyspepsia”.