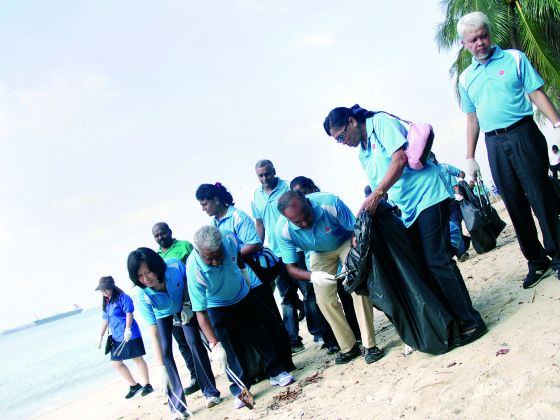 Over S$100,000 was raised yesterday morning for the Amalgamated Union of Public Daily Rated Workers (AUPDRW) at a beach clean-up at East Coast Park that will help pay for training as well as provide bursaries and medical assistance to union members in need. The union’s adviser, Law and Foreign Affairs Minister K Shanmugam (centre), who joined in the clean-up, said membership numbers have been falling steadily, dipping to half of what they were 20 years ago. But this is a good sign, as it shows that Singapore has progressed and younger people are moving on to better and more well-paid jobs, he said. As of December last year, the AUPDRW — whose workers hold jobs such as pest control and road-sweeping — had 700 members, down from 1,300 in 1992, with half its members aged 55 and above.