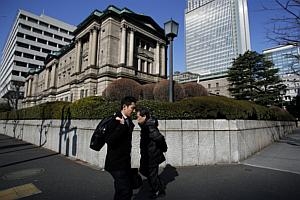 TOKYO stock prices took a heavy hammering yesterday in the wake of the Bank of Japan’s decision on Tuesday to hold off for now on applying any further monetary stimulus to the Japanese economy, despite a recent series of setbacks to Prime Minister Shinzo Abe’s “Abenomics” policies.

But one item of good news for the embattled prime minister, who is also under pressure to mend damaged relations with China and South Korea, was an announcement yesterday that leading Japanese companies have agreed to raise basic wages for the first time in many years.

The pay rises, notified by major companies to their labour unions, should go some way towards countering the impact of next month’s scheduled hike in Japan’s national sales tax and help keep economic recovery on track in Japan, analysts said.

But, the Tokyo stock market showed its strong disappointment yesterday at the lack of new moves by the Bank of Japan (BOJ) to underwrite the success of Abenomics and the Nikkei 225 stock average plunged by 2.6 per cent to 14,830.39 in its sharpest percentage fall since the beginning of last month.