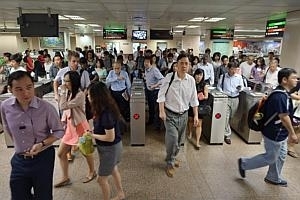 [SINGAPORE] The Singapore economy grew 4.1 per cent in 2013, roundly beating market forecasts and the government’s own estimate.

But growth this year could run up against rising wage costs as the labour market tightens further. Costs and manpower are the very issues businesses seem most anxious to hear about from Deputy Prime Minister and Finance Minister Tharman Shanmugaratnam when he delivers the Budget speech today.

Singapore’s gross domestic product (GDP) grew 5.5 per cent in Q4 from a year ago, shooting past the flash estimate of 4.4 per cent to beat the market consensus forecast of 5.2 per cent growth as well. This meant a quarter-on-quarter annualised rate of 6.1 per cent growth – far better than the government’s advance estimate of a 2.7 per cent contraction.

These unusually large upward revisions were in part due to statistical adjustments to 2012’s figures. Singapore grew 1.9 per cent in 2012, not 1.3 per cent as reported earlier, the Ministry of Trade and Industry (MTI) said yesterday.

But the revisions also came from better-than-expected industrial production in December. Manufacturing grew 7 per cent year-on-year in Q4, up from a 3.5 per cent flash estimate, driven by “simultaneous spikes in output from the biomedical and electronics sectors”, said DBS economist Irvin Seah.

The services and construction sectors’ growth rates for Q4 were also revised up to 5.9 per cent and 4.8 per cent year-on-year respectively, though both eased from Q3’s pace. High labour costs may have compressed the margins of construction firms despite a healthy pipeline of projects, said Mr Seah. He thinks wage costs weighed services’ growth down too, though stronger regional growth boosted the trade- related, tourism and financial services segments.

Singapore’s full-year growth was revised to 4.1 per cent, up from the 3.7 per cent Prime Minister Lee Hsien Loong announced in his new year message.

This was despite a 6 per cent contraction in Singapore’s key non-oil domestic exports for the full-year – a worse performance than the 4-5 per cent drop International Enterprise (IE) Singapore had forecast.

As manufacturing began to recover its rhythm only in the second half of 2013, the financial services and the wholesale trade sectors clocked the strongest contribution to growth last year.

MTI permanent secretary Ow Foong Pheng said the official growth forecast for 2014, which remains at 2-4 per cent growth, takes into account that the global economy will “improve modestly”. The US economy is slated to improve as fiscal cutbacks ease, and private consumption and investments rise; and the eurozone recovery is set to gain traction. Nearer home, China’s growth will moderate as Beijing pushes out reforms to drive the economy towards consumption-driven growth, but Asean economies are expected to stay resilient, Mrs Ow said.

The global recovery will benefit Singapore’s external-facing sectors, but MTI cautioned that the things to watch for include how the lack of certainty over the pace of the US quantitative easing (QE) tapering weighs on financial markets and business sentiment, and the potential unintended consequences of China’s policy adjustments.

Also, growth for labour– intensive, domestic-facing sectors may be constrained by tight labour market conditions – set to get even tighter as foreign levies rise another notch in July. Credit Suisse economist Michael Wan thinks that more foreign labour curbs may be unveiled in today’s Budget statement.

Labour, rental and utilities costs account for 78 per cent of manufacturing SMEs’ total business costs and 85 per cent of large manufacturers’, an MTI study found.

Upward pressure on rents is slated to ease with the strong supply of industrial and commercial space in the pipeline; and utilities cost increases may ease as global oil prices moderate. But the tight labour market will continue to feed higher wage costs into unit labour cost (ULC) increases this year, said MTI’s economics division director Yong Yik Wei.

The ULC rise moderated from 5.3 per cent in 2012 to 3.1 per cent in 2013, but Citi economists Kit Wei Zheng and Brian Tan noted that ULC growth picked up in Q4. This points to cost pressures and reinforces the need for an enhanced Productivity and Innovation Credit (PIC) to bolster the cashflow of SMEs in domestically oriented sectors, they said.

Ms Yong said: “ULC is also a function of productivity; if productivity gains traction and improves, that should improve.” Unfortunately, labour productivity growth was flat last year, though it did not fall as it had in 2012, by 2 per cent.

But Mrs Ow said SMEs’ take-up rate of productivity initiatives launched by the government has been encouraging, and expects productivity – especially for the manufacturing sector – to improve. “Productivity is driven, of course, not only by the bottom line but also the topline, as we grow and expand into new markets,” she added.