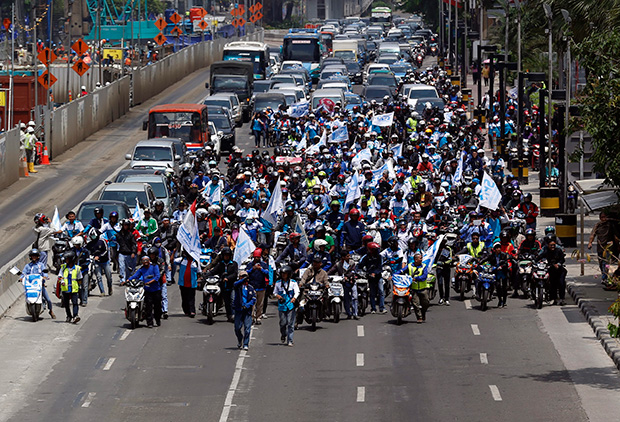 Workers headed into the capital from industrial areas in the greater Jakarta region and blocked the central Hotel Indonesia roundabout, waving flags and listening to speeches from union leaders. Police expected 10,000 to gather, fewer than the 50,000 people that unions aimed for.

The strike is the biggest protest since Mr Widodo, known as Jokowi, took office on Oct 20, and a test of his pro-business credentials. Higher wages would erode the country’s competitive advantage against China as manufacturers look for alternate production locations, and contribute to inflation after Jokowi boosted fuel prices last month.

“We want to stay at the HI roundabout until forcibly disbanded by police,” said Dedi Hartono, a labor representative on the Jakarta Wage Council. “We want to stay overnight until tomorrow if we can. We want Jokowi to meet us to give some comment or give some commitment about worker welfare.”

Jokowi, who heads to South Korea today for a meeting of Southeast Asian leaders, is seeking to reduce income inequality while boosting investment in Indonesia.

Wage negotiations are a matter for local administrations rather than the central government, Finance Minister Bambang Brodjonegoro said yesterday. The government wants to use the money saved from fuel subsidies for things like infrastructure and irrigation to improve agriculture, he said.

Jakarta governor Basuki Tjahaja Purnama last month approved a 2015 minimum wage of 2.7 million rupiah ($219) a month in the capital, with unions calling for at least 3 million rupiah, a level the country’s main employer group has said would lead to job cuts.

The rise of about 30% last month in fuel prices has meant a 50% drop in workers’ purchasing power, Hartono said. Unions also want compulsory pensions, health insurance improvements and an end to outsourcing, he said.