Thousands of foreign experts return to work in Binh Duong 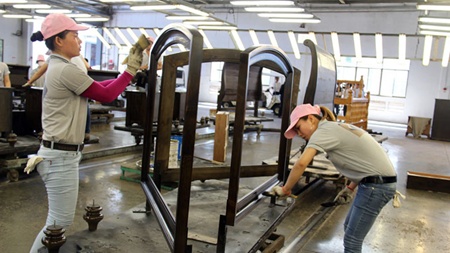 Thousands of foreign experts return to work in Binh Duong

HA NOI (Biz Hub) — More than 2,100 out of 2,650 foreign experts have returned to their work in industrial zones in the southern province of Binh Duong as almost all riot-affected enterprises have resumed operation.

The information was revealed by Tran Van Lieu, head of the provincial management board of industrial zones (IZs) at a press briefing on the province’s socio-economic development situation on June 4.

Lieu also said the board has granted work permits free-of-charge to foreign experts.

At the briefing, Vice Chairman of the provincial People’s Committee informed that Binh Duong maintained a high economic growth in the first five months of the year, with its industrial production reaching over VND70 trillion (US$3.3 billion), up 12 percent year-on-year, and an export turnover of $5.5 billion, up 11 per cent.

The same day, the province held a ceremony to hand over investment licences to 41 FDI projects with a combined capital of $146 million.

According to Mai Hung Dung, Director of the provincial Department of Planning and Investment, among the projects, there are 10 from Japan, nine from the Republic of Korea, five from China, four from Hong Kong and three from Taiwan. Eight licences were issued after May 15.

This is a positive sign for the province as it is one among the three localities most seriously affected by disturbances which occurred on May 13-14 when some individuals took advantage of workers’ rallies – in protest of China’s illegal placement of its Haiyang Shiyou-981 drilling rig in Viet Nam’s waters – to incite others to damage and loot assets of some foreign-invested companies and factories.