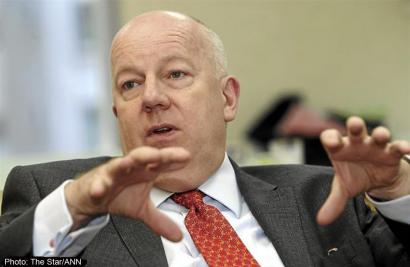 PETALING JAYA- The talent crunch in the local financial services sector is expected to worsen in the coming years partly driven by the Gen Y segment that currently makes up about 25 per cent of the workforce in the banking system.

Asian Institute of Finance (AIF) chief executive officer Dr Raymond Madden said that the talent shortage could be due to the lack of understanding on how to cope with the Gen Y group.

“Within the next eight to nine years, we expect the Gen Y workforce in the banking system to rise to about 50 per cent from 25 per cent currently, which means that almost half of the people working in banks will be Gen Y employees, namely those below 30 years of age.

“At the moment this group of people (Gen Y) makes up about 40 per cent of the current workforce in Malaysia and in many ASEAN countries. This number is expected to increase to 75 per cent within a relatively short span of time,” he told StarBiz.

According to the Financial Sector Blueprint published in 2011, the workforce number in the financial sector stood at 144,000. It is anticipated that over the next 10 years, the sector would require a workforce of about 200,000, an increase of 56,000 from the current 144,000 employees.

Madden said among the sectors in the financial services industry that were facing talent shortage was in Islamic finance, notably in the areas of syariah expertise.

Besides this, he added, the crucial areas in the banking system facing talent shortage were in credit and risk management, corporate finance, treasury and wealth management.

This group, he said, was looking at what he termed as the three E’s – engage, enrich and empower. He described Gen Y as an impatient lot as they wanted to be prominent in the organisation and would join another organisation if they did not achieve their targets.

As this group was ambitious and wanted to climb up the career ladder as quick as possible unlike their older counterparts, hence employers needed to know how to deal effectively with the Gen Y segment.

Towards this end, Madden said AIF – through its four affiliate institutions – was working closely to beef up talent in the financial services sector.

For example, he said the Financial Sector Talent Enrichment Programme (FSTEP), which is run by IBBM, had played an important role in training new graduates in the financial services industry.

FSTEP is an intensive-training programme that prepares trainees for the operational aspects of finance and banking.

AIF in collaboration with UK-based Ashbridge Business School carried out a survey this year, which among others, showed that 22 per cent of Gen Y employees in Malaysia believed it was reasonable for them to be in a management role within six months of starting work at their respective organisations.

Commenting on the survey, he said there were also inter-generation gaps that existed in the financial services industry between the Gen Y and their older managers, adding that there was a clear difference in perception of Gen Y managers and Gen Ys themselves.