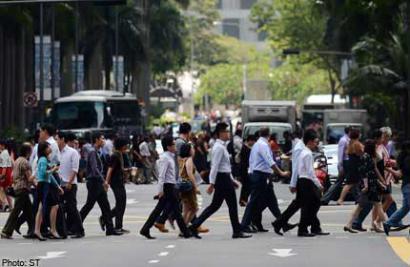 You might have heard from friends in managerial or executive positions complaining that the inflow of foreigners here should be cut.

But a recent survey finding suggests that more affluent Singaporeans – which includes professionals, managers, executives and businessmen (PMEBs) – could be more tolerant of foreigners.

Researchers involved in the survey explained that the tolerance of foreigners depended on Singaporeans’ circumstances.

The survey found that 52 per cent to 53 per cent of citizens who earned less than $3,000 a month agreed or strongly agreed that foreign inflows should be cut. But, for those who earned $3,000 or more, the figure was 32 per cent to 45 per cent.

The survey was done as part of the Our Singapore Conversation exercise and involved the Institute of Policy Studies (IPS). Some 4,000 citizens were interviewed from December last year to January.

The survey’s report said the finding suggests that lower-income groups “are more inclined towards reducing the inflow of foreigners, which may be a reflection of the competition for jobs at that level”.

The converse could be the case for those who earn more.

Still, he said people are “never always rational and consistent” due to human nature.

Associate Professor Tan Ern Ser, an IPS faculty associate, said a person’s take on foreign-labour policies depends on “which hat one is wearing”.

Employees may dislike the competition for jobs from foreigners, but employers may prefer a policy that gives access to “sufficient affordable manpower”, he said.

Dr Leong said views can change when circumstances change. For instance, when an employer who depends on foreigners steps out of work, he may personally not want to be in a shopping mall crowded with foreigners, he said.

He added that the issue of foreigners is further complicated by matters such as how people have different definitions of foreigners, and varying tolerances towards different groups of foreigners. So, it can be difficult to draw definitive conclusions from the survey finding.

On start-up business owners hiring foreigners and issues that may arise from hiring more of them, an Association of Small and Medium Enterprises spokesman said it is managing a programme here that helps SMEs find talent from polytechnics and Institutes of Technical Education. This could “build up a pipeline of young talent” that can join SMEs, he said.