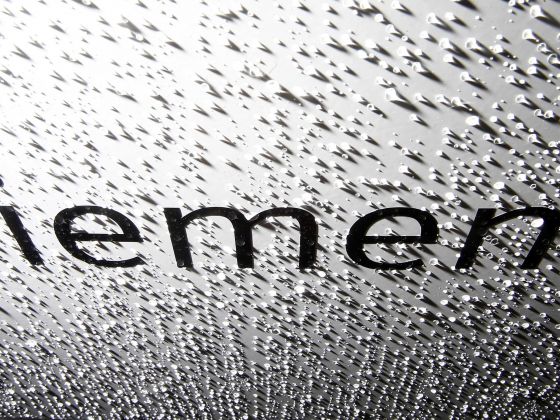 BERLIN/MUNICH – The chief executive of German conglomerate Siemens SIEGn.DE tried to calm a brewing storm over job cuts on Friday after he let slip at an investor conference in New York that his plan to restructure the company could put up to 11,600 staff at risk.

Joe Kaeser, who was vaulted into the top job at the Munich-based firm nine months ago, unveiled an overhaul earlier this month that removes layers of management by abolishing a corporate structure, along sectoral and regional lines, that was put in place by his predecessor Peter Loescher.

At the investor conference he was pressed to give more details on his goal to save 1 billion euros annually through the restructuring, and responded by attaching specific job numbers to the scheme for the first time.

“We do away with the four sectors; 7,600 people work in sector coordination, coordinating a middle layer that is gone,” Kaeser said, according to a podcast of the remarks posted on the Siemens website. “Another 4,000 people were doing a regional cluster analysis, which is not necessary anymore.”

German media jumped on the comments, initially reported by Bloomberg, adding the two figures together and coming up with total cuts of 11,600.

In Germany, staff cuts are traditionally discussed with union members behind closed doors before becoming public. The fact that Kaeser was in the United States talking to investors when he made the comments was all the more galling to workers.

“We are shocked to learn that Joe Kaeser announced in New York that he plans to cut some 11,000 jobs,” said Klaus Abel, a union representative in Berlin.

“This would be a declaration of war on IG Metall if he really meant this. We are still operating under the assumption that these jobs will not be cut, rather the company will be reorganised.”

Kaeser can ill afford a showdown with unions which might distract from his ambitious overhaul, dubbed “Vision 2020”, and from separate plans to bid for the power assets of French rival Alstom ALSO.PA, already the target of an offer from U.S. giant General Electric GE.N.

The reports sent Siemens into damage control mode. Fresh off his return flight from New York, Kaeser issued a memo to the company’s German staff, reassuring them that no final decisions on cuts had been taken. Siemens employees 360,000 staff worldwide, a third of which are based in Germany.

“These headlines have created confusion. They worry me and surely worry you too!” said the Kaeser note, seen by Reuters. “First the most important: The reports are not right and are based on a wrong interpretation.”

Talks on concrete measures linked to his efficiency drive would begin soon and be conducted in an atmosphere of mutual trust between the proper partners, he added.

Kaeser’s predecessor Loescher ran into trouble with unions when he tried to push through job cuts. He was pushed out last summer after a series of profit warnings.

Kaeser has vowed to restore a sense of pride at Siemens, which traces its roots back to an electrical telegraph company founded in Berlin in 1847.

It was unclear whether his comments might hurt Siemens’ chances of snaring Alstom’s power assets from the clutches of GE, but the headlines seem unlikely to help his cause in Paris.

Earlier this week GE Chief Executive Jeff Immelt met with French President Francois Hollande and promised to create 1,000 new engineering and manufacturing jobs within three years of a deal with Alstom, according to sources familiar with the talks.