Qantas pushes ahead with job cuts 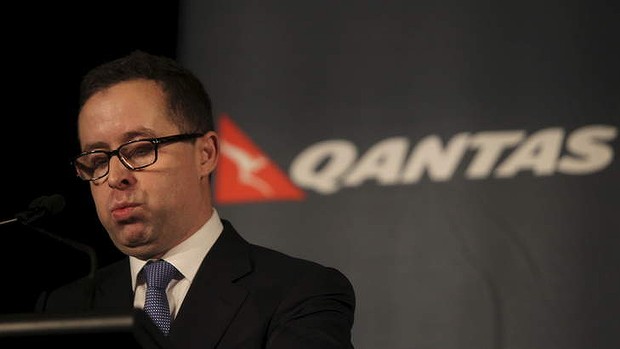 Qantas pushes ahead with job cuts

Qantas Airways is on track to complete 4000 of its planned 5000 job cuts by June 2015, with management, engineering, catering, freight, cabin crew, airport and flight operations among those affected.

In a presentation to the Macquarie Australia Conference in Sydney on Thursday, Qantas chief executive Alan Joyce provided fresh details of the airline’s cost-cutting plan.

He said the airline is aiming to achieve $800 million of cost savings and reduce its debt by $1 billion by June 2015 as part of its three-year plan designed to get the airline back to profitability.

The airline’s goal is to reduce its costs, excluding fuel, by 10 per cent over the next three years and to lower the cost gap with rival Virgin Australia to around 5 per cent in a move that would increase Qantas’s margin advantage.

But he said he expected international capacity growth into Australia would moderate from around 9 per cent this financial year to 4 to 5 per cent in the first half of the 2015 financial year.

“That is … more in line with underlying market growth which means there is less pressure on yield when capacity gets in line with traffic,” he said.

Mr Joyce said domestic market growth in the current half was expected to be around 3.5 per cent and could moderate further into the next financial year.

“But we have to assume the intensity continues and our plan to reduce costs, reduce debt, that plan can work under intense competition,” he said.

Other cost-saving initiatives include plans to simplify its fleet by retiring its fleet of ageing 767s and some of its older 747s, which will have a combined annual cost benefit of $155 million.

Mr Joyce said Qantas was prioritising fleet simplification but would continue to invest in customers in a targeted away, including the Dreamliner for Jetstar.

Qantas, which has lost its investment grade credit rating, is aiming to have its gross debt to adjusted earnings before interest, tax, depreciation and amortisation ratio below 4x by the 2017 financial year. The airline said that ratio would peak this year.

Mr Joyce said the focus was on debt reduction and reducing capital spending rather than asset sales.

“We are still working through the pros and cons of selling the frequent flyer business,” he said, referring to the potential to sell a minority stake in the airline’s $2.5 billion loyalty arm. “It is a complex issue.”

Mr Joyce said the airline was also continuing its talks with the government about amending the Qantas Sale Act to allow for greater foreign ownership of the airline. The Senate is not expected to look at the issue until after July.

“We continue to talk to all parties about that process and we are committed to the repeal of the Qantas Sale Act and working with the government on that,” he said.