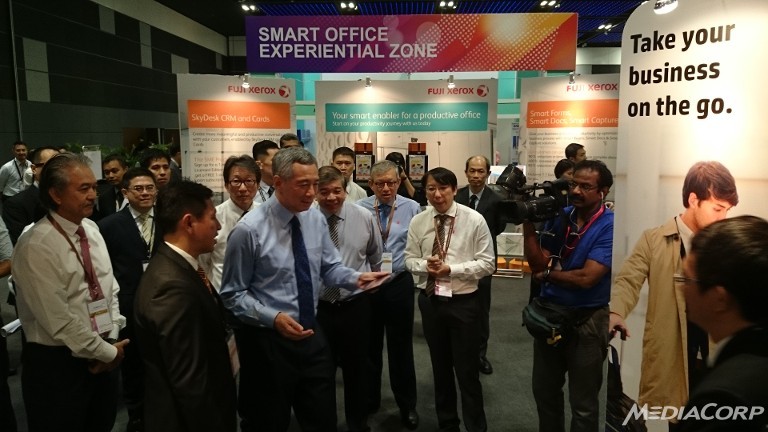 SINGAPORE: The Government has made the productivity drive a national effort, where everyone has to play their part, Prime Minister Lee Hsien Loong said on Tuesday (Oct 7) at the launch of the National Productivity Month.

To put pressure on employers to upgrade their workers’ skills rather than simply hiring extra bodies, the Government is controlling foreign worker inflows, he said.

Still, firms are getting enough access to foreign workers to complement their Singaporean workforce. This is because if the Government allows too few foreign workers or freezes their numbers, some businesses, especially the smaller ones, will not survive. Many Singaporeans’ jobs would then disappear, he said.

Citing the latest manpower numbers, Mr Lee said efforts to control foreign worker inflows are “bearing fruit”. Foreign worker growth has slowed significantly to its lowest level in five years, and is now at a more sustainable level, “about where we want it to be”.

At the same time, real wages are rising – both median wages and more importantly, wages for the lower-income, he noted.

“I do not expect any further major measures to tighten foreign worker numbers,” Mr Lee said.

With Singapore shifting to a slower pace of growth, from 6 per cent to about 3 per cent a year – typical of developed economies – the productivity drive is even more important today, Mr Lee said.

Not only is productivity important for economic growth, it is also crucial for raising the incomes of workers, he said. In the short term, wages may rise by themselves in a tight labour market, but in the longer-term, wage rises can only be sustained through higher productivity.

Foreign worker inflows are being controlled to put pressure on employers to upgrade their workers’ skills rather than simply hiring more people, he said.

Incentives and schemes help support companies raise their productivity, be it by investing in technology, training workers or streamlining of operations. There are also schemes tailored to companies in individual sectors, which companies can tap on to make productivity and innovation improvements, and to upgrade their workers. There has been a steady increase in the take-up of such schemes, Mr Lee said.

The Government has also made the productivity drive a national effort, he said. Companies must adopt a “productivity mindset”, and not be afraid to implement technological solutions and change business processes to improve efficiency. They must also seek constantly to improve their operations, recognise their workers’ skills, and value and train workers.

Education and training institutions have to equip workers with relevant skills, while workers themselves must hone and upgrade their skills, as well as help to identify problems at work and improve work processes, Mr Lee said.

Unions have to encourage workers to take advantage of opportunities to upgrade themselves. And society must celebrate individuals for their passion, endeavour and skills, not their qualifications alone, he said.

“Productivity is a long haul, but so long as we have confidence and keep working at it together, it can be done,” he added.