Opposition to more Bangladeshi workers in Malaysia amid Hasina visit 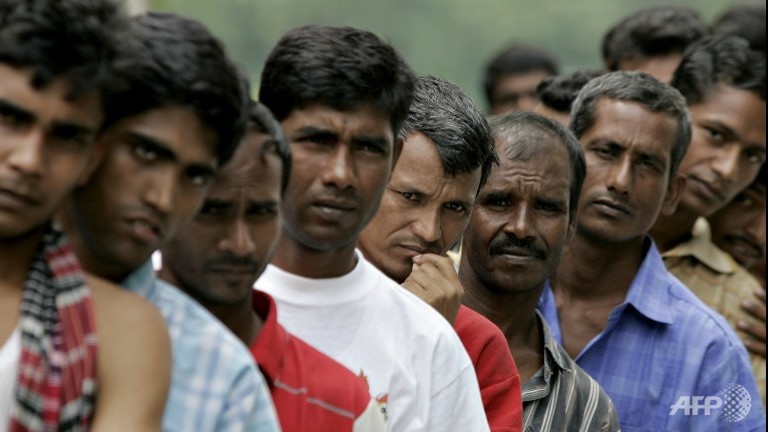 Opposition to more Bangladeshi workers in Malaysia amid Hasina visit

KUALA LUMPUR: Low wages and political strife have driven hundreds of thousands of Bangladeshis to seek employment in Malaysia.

Bangladeshi Prime Minister Sheikh Hasina is in Malaysia this week to secure more job opportunities for her people. She is here at the invitation of Malaysian Prime Minister Najib Razak to discuss ways to strengthen ties between the two nations.

According to government estimates, there are more than half a million Bangladeshis living and working in Malaysia. Millions more are waiting for a chance to find jobs in the Southeast Asian nation. “We have registered 1.4 million people who are willing to come to Malaysia,” said Bangladeshi Expatriates’ Welfare and Overseas Employment Minister Khandker Mosharraf Hossain.

“I like Malaysia,” said Bangladeshi chef assistant Mostufa Golam Rabbani, while construction worker Kajel Chokder added: “There’s not much money in our country. Salaries aren’t very high there either.” Bilateral agreements signed on this trip will pave the way for 12,000 more Bangladeshis to work in the eastern state of Sarawak. It is the latest collaboration between the two nations – Malaysia recently revealed it is secured US$3.2 billion worth of projects in Bangladesh.

But the Malaysian Trades Union Congress (MTUC) is against more Bangladeshi workers entering its borders. “We have natives here, why can’t the (Malaysian) government do the necessary things so that we can tap them into the market rather than bring in outsiders? I mean we respect them as workers, but charity begins at home,” said MTUC Secretary-General N Gopal Krishnan.

“They (employers) are only concentrating on their profit margin. If they take the locals, they have to follow the Employment Act, their mandatory contribution they have to pay to EPF (Employees Provident Fund) and also others. By having foreign workers they don’t have to pay.”

It is not the first time the issue of Bangladeshi workers in Malaysia has been scrutinised. During the general elections last year, some, including the opposition, had accused the Malaysian government of bringing Bangladeshis in to vote for the Barisan Nasional coalition.

The claims have been rubbished by Malaysian and Bangladeshi government while employers here have defended the need for Bangladeshi workers.

“As far as we’re concerned, many of them are very dedicated and hardworking,” SAL Group chairman Abdul Rashid Abdul Ghani. “We really need them here, now, because there is a shortage of foreign workers. We have problems with the local workers because more Malaysians prefer the higher-end working conditions and working salaries.”

He added Bangladeshi workers could also use the skills they have learnt to improve their own country when they return home.