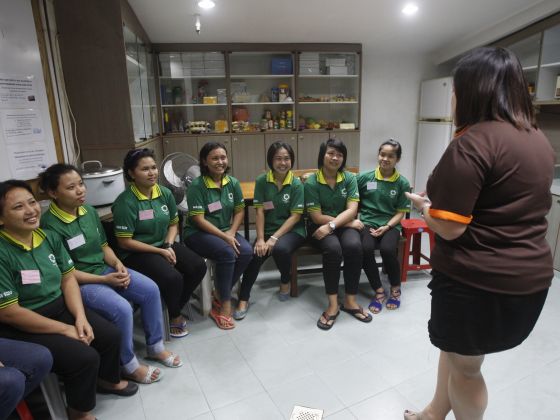 SINGAPORE — The Association of Employment Agencies (Singapore), or AEAS, yesterday dismissed claims made in a recent Al Jazeera article that maid agencies here are putting foreign domestic workers (FDWs) “on display” at shopping malls and treating them as “commodities”.

In response to media queries, a Ministry of Manpower (MOM) spokesperson said it had visited employment agencies in the two shopping centres mentioned in the report — Bukit Timah Shopping Centre and Katong Shopping Centre — and did not find any inappropriate displays of FDWs.

The Al Jazeera report, published last Friday, said the agencies in the malls “display women at work” and that the FDWs “sit beneath garish signs and posters, testifying to their friendliness and industriousness, or advertising ‘super promo’ rates and ‘special discounts’”.

Yesterday, Philippine Labour Secretary Rosalinda Baldoz said in a statement that the Philippine Overseas Labour Office had taken action against two employment agencies mentioned in the report. It suspended the accreditation of Homekeeper Agency — barring it from recruiting FDWs from the Philippines — for engaging in “the so-called ‘discount on maids’ marketing strategy” and referred Budget Maid Agency to the MOM as it was not accredited to recruit FDWs from the country.

The Philippine Embassy’s labour attache Vicente Cabe said the temporary suspension was imposed because investigations are being conducted.

Mr Cabe had previously told The Straits Times that he had visited Bukit Timah Shopping Centre and found that the Al Jazeera article “doesn’t seem to have basis”.

Speaking to TODAY, he reiterated: “We didn’t see (in the mall) what was reported … we just saw the applicants sitting inside the office. Some agencies had advertisements saying they only charge this much for the service fees.”

He added that Homekeeper and Budget Maid “have not been found to have (committed) any wrongdoing yet”. Still, the embassy has asked the MOM to investigate, he said.

The embassy yesterday held a meeting with AEAS representatives and four employment agencies, including Homekeeper.

The MOM spokesperson noted that as some agencies have training facilities in their front offices, “it is not unreasonable for FDWs to be performing such chores at the employment agency’s premises”.

AEAS president K Jayaprema added: “There are many agencies that use the office premises to train the girls … We’d rather not have candidates sit around idling and chit-chatting — you might as well do some training.”

She said the FDWs are at the agencies’ offices to wait for employers to pick them up or for interviews from prospective employers.

On the allegation that the agencies were offering discounts on FDWs, she pointed out that the photograph accompanying the Al Jazeera article showed an advertisement for a discount on the agency’s service fees — and not on the services of the domestic workers. “Any business person has the right to offer a discount,” Ms Jayaprema said.

She added: “It is a flawed article … We’ve done our visits (to the malls) and we don’t think there is any violation.”

Still, Ms Jayaprema suggested that the agencies move their waiting and training areas to the back of their offices to prevent such misperception and word their advertisements more clearly.

The ASEAS is appealing to the Philippine Embassy on behalf of Homekeeper. It also hopes the suspension will be lifted as soon as possible.

Homekeeper managing director Carene Chin said the agency has contacted the Philippine Embassy and provided evidence to prove that the allegations were false.

She added that the agency was considering its legal options.

The allegations are “nonsense”, Ms Chin said. “It is a very irresponsible article, (the author) has not done his research well. Just … jumping to conclusions.”

Al Jazeera did not respond to queries by press time.

The MOM spokesperson stressed that inappropriate display of FDWs at the premises of employment agencies or advertising them as being “available for hire at cheap or discounted prices” were unacceptable practices.

The spokesperson said: “MOM proactively audits Singapore employment agencies and those found to have acted in a manner detrimental to the interest of the FDWs will be dealt with in accordance with the Employment Agencies Act.”