More job vacancies in 2013 than year before 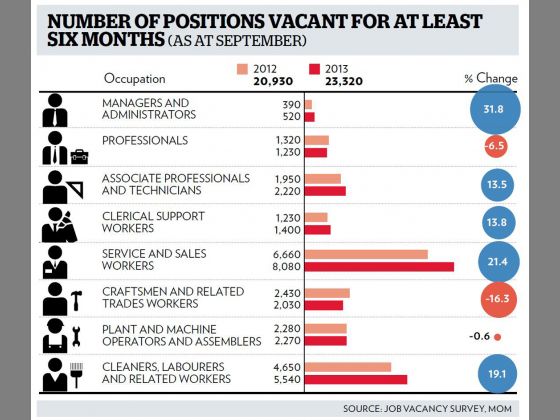 More job vacancies in 2013 than year before

SINGAPORE — The number of job vacancies here continued to rise last year, as employers — especially those in the services sector — struggle to find Singaporeans willing to pick up the slack amid the Government’s moves to moderate the inflow of foreign workers.

A report released yesterday by the Ministry of Manpower (MOM) showed that vacancies rose by 9.7 per cent in September last year to 61,900, compared with the same month in 2012. From September 2011 to September 2012, the number of vacancies increased by 4.4 per cent.

Among the job openings that were unfilled, two-thirds were cited by employers as being shunned by Singaporeans.

Openings for service and sales workers made up the bulk of the vacancies (25 per cent).

The situation has gotten so dire that employers surveyed by the MOM reported that they had difficulties finding Singaporeans to fill about nine out of 10 vacancies for service jobs such as waiters, security guards, cookers and cashiers.

The acute shortage was also felt in other sectors as well, for a variety of jobs including delivery men, bus drivers, motor vehicle mechanics and cleaners.

The top reasons cited by employers why Singaporeans shunned these positions were the unattractive pay and the physically strenuous nature of the jobs, “largely reflecting the concentration of lower-skilled occupations among hard-to-fill vacancies”, the MOM added. Other common reasons were that these jobs involved shift work and the working environments were not attractive.

Economists whom TODAY spoke to noted that there are more jobs available than can be filled by the Singaporean workforce.

While the situation could provide ammunition for companies to ask the Government to ease the moderation of foreign manpower inflow, the economists felt that it was unlikely that the authorities would do so, as the Republic continues its bid to raise productivity.

Pointing to the new malls springing up across the island, CIMB economist Song Seng Wun said each shopping centre, for instance, would require a gamut of workers such as security guards, maintenance crew, cleaners and shop assistants.

He reiterated that to attract Singaporeans to the vacancies, salaries have to go up — even more so if employers want to attract workers from the untapped pool of non-working Singaporeans, such as housewives.

To alleviate the situation, productivity has to go up, Mr Song said. “It is all about working attitude. Staff need to be incentivised,” he added.

While consumers would initially feel the brunt of higher salaries offered by companies to attract more workers, Mr Song said higher productivity in the longer term will eventually bring costs down for businesses, which could then pass on the savings to consumers.

Food and beverage and retail outlets told TODAY that they have tried to make the jobs more attractive, but they stopped short of raising salaries.

Mr Ye Ming Yuen, General Manager of Home Club, said the F&B outlet pays its waiters between S$7 and S$11 an hour. Last year, it started a bonus scheme for those who hit their sales target.

“It has helped in recruiting more waiters but recruitment has gotten harder over the years … workers have higher demands and want more money,” he said.

Mr Ye added that instead of offering higher pay to attract new workers, he would rather use the money to incentivise existing staff to raise their productivity.