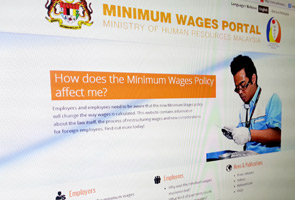 KUALA LUMPUR: An online portal has been set up to disseminate information on the country’s minimum wage policy ahead of its implementation on Jan 1, 2014.

The portal, said Human Resources Minister Datuk Richard Riot, will serve to clear doubts such as what kind of payments count towards minimum wages and who is included and excluded from the policy.

When launching the portal yesterday, Riot said Malaysia could no longer rely on cheap labour to compete in the global market as Malaysia did not have a competitive advantage over countries such as Indonesia, Myanmar, Vietnam, Laos or Bangladesh.

The Minimum Wage portal, he said, had three segments – for employers, workers and also for the latest news, publications and updates on the policy.

“Through this portal we hope to inform the public the rational of implementing this policy in a more accurate and effective way,” he said in his speech.

The minimum wage for private sector employees has been set at RM800 for workers in Sabah, Sarawak and Labuan and RM900 per month for employees in the peninsula.

It covers all employees, local and foreign, and employers in all economic sectors, except those in the domestic service sector such as maids and gardeners.

The portal can be accessed at http://minimumwages.mohr.gov.my/.

The enforcement of the minimum wage policy, he said, would cost Malaysian employers an additional RM14bil a year.