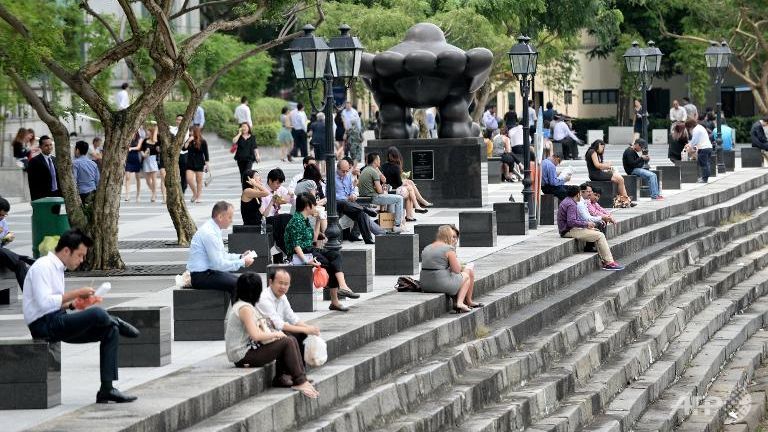 Office workers sit along the quay at Raffles Place financial district in Singapore.

To support the government’s drive to transform the economy, there will be sector-specific manpower plans for every industry transformation map, said Manpower Minister Lim Swee Say in Parliament on Friday (Apr 8).

The sectoral manpower plans, which will be developed by sectoral tripartite committees, was initially announced by former Finance Minister Tharman Shanmugaratnam.

These plans, according to Mr Lim, will complement and support the Industry Transformation Programme announced by Finance Minister Heng Swee Keat in his Budget speech last month. The transformation includes the development of industry transformation roadmaps for over 20 sectors, which account for 80 per cent of Singapore’s economy.

Speaking in his Ministry’s Committee of Supply debate, Mr Lim said the sectoral manpower plans will also go towards building a strong Singapore core in the workforce. But as industry transformation speeds up, Mr Lim also acknowledged that redundancies may go up.

To this end, he announced enhanced measures to support Singaporean workers, especially Professionals, Managers, Executives, and Technicians (PMETs). These enhancements are part of the “Adapt and Grow” initiative earlier announced by Mr Heng.

The Career Support Programme, which was launched in 2015 to encourage employment of mid-career PMETs, will be now be extended to two more groups.

In addition, the Professional Conversion Programme (PCP), which was launched in 2007 to provide training and wage support to PMETs switching careers, will be extended to more sectors, like Chemicals and Pharmaceuticals, and Logistics and Retail. There will also be support for PMETs who are not switching careers from one sector to another, but to different specialisations within a sector and within a company.

“So if company A (is) downsizing, retrenching workers, (but) company B is growing and expanding, we will support company B to take over the retrenched workers from company A, and help them to go through the professional conversion,” he explained.

P-Max, a place-and-train programme to match PMETs who have worked at least a year with small and medium enterprises launched last year, will be expanded with more partners, trade associations and chambers. “Our aim is to place more than 1,000 mid-careers PMETs under this programme every year,” he said.

As for what Mr Lim calls “rank-and-file” jobseekers, there will be more place-and-train programmes for them, with more sectors – like hotel, and infocomm media – being covered.

Mr Lim also said that his Ministry will work to strengthen partnerships with the employment agency industry, to help strengthen placement of local PMETs.

Overall, the Manpower Ministry will also improve information support to both employers and jobseekers through initiatives like the National Jobs Bank, launched in 2014.

But even as he outlined the support measures available to workers, Mr Lim cautioned: “We need our jobseekers to do their very best to help themselves too.”

“To my fellow Singaporeans who are affected by redundancy, my concern for them is that the longer they are out of employment, the harder it’ll be for them to get back into employment. Therefore, our priority is to help them get back to work quickly,” he said.

“We’re unable to promise – no pay cut(s), or guarantee of job offers, but what we do promise is our best efforts to help, with a variety of options, and the diversity of opportunities.”