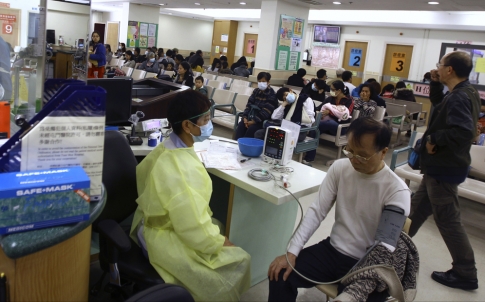 Public hospitals are expected to need an additional 2,100 beds in the next seven years to meet demand from a growing and ageing population.

But while the Hospital Authority believes it can provide the beds, it is not so sure about providing staff to treat the patients who fill them.

“We are confident that we can more or less fulfil the target number of additional beds needed by 2021, when all our expansion projects are completed,” the authority’s chief executive, Dr Leung Pak-yin, said yesterday. “But manpower is a real challenge to us even if the hardware can be expanded.”

The public health system is short of 500 nurses and 310 doctors – up from some 250 doctor vacancies two years ago.

The authority also plans a review of the conditions and pay of the lowest-paid workers, support staff. Their turnover rate soared to a high of 15.6 per cent last year, from just under 14 per cent the previous year.

The chronic staff shortage has curbed expansion of the public healthcare service, Leung said, and the number of beds in some areas, such as New Territories West and Kowloon Central, has failed to catch up with population growth.

Bed occupancy in New Territories West was the highest at an average 97.5 per cent, soaring above 120 per cent – worst among the authority’s seven hospital groupings – at peak times.

“A review will be conducted on [their] welfare and salaries in the hope of stopping them leaving,” he said. “It will also study whether it is necessary for staff to take up 24-hour duty.”

The doctor shortage is not expected to ease until 2015, when the number of graduates increases from the current 250 a year to 320.

Leung said at a press conference that the projection on the need for extra beds – both for acute cases and rehabilitation – by 2021 was based on current use, taking account of population growth and the increased proportion of elderly patients who needed more services.

The Hospital Authority received $HK47.97 billion from the government in 2013/14, up 3.9 per cent from the previous financial year. More than 71 per cent went on salaries.