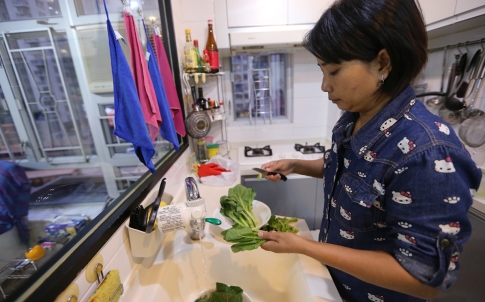 Maids’ wages go up by HK$100 from today – that’s per month and only for those signing new contracts.

Helpers complained the new wage, HK$4,110, was still too low and it was unfair that those signed to contracts would have to wait until they expired before benefiting.

One employers’ group also expressed unhappiness over the rise, saying the wage should have been frozen at HK$4,010.

Maids have been calling for wages to be raised to HK$4,500, or to be paid the statutory minimum wage of HK$30 an hour.

“I am very disappointed by the decision. Inflation has been so serious; what can you buy with HK$100? How do you expect us to survive?” Eni Lestari, spokeswoman of the Asia Migrants’ Coordinating Body, said. “The pay has been going up so slowly. In 1998, it was HK$3,860 a month.”

The Labour Department said the decision took into account Hong Kong’s near-term economic outlook and struck a balance between employers’ ability to pay and the helpers’ livelihood.

For employers who pay a food allowance instead of providing food, the monthly amount will go up HK$44 to HK$920.

Joan Tsui Hiu-tung, convenor of the Support Group for Hong Kong Employers with Foreign Domestic Helpers, said that minimum wage should be frozen. “Why do we still need to offer a raise to the helpers who perform poorly? In Chinese culture, they get a raise only if they do well,” she said, adding that some employers were already paying helpers HK$1,000 more than the minimum wage because they were very helpful.

Joseph Law, chairman of the Hong Kong Employers of Overseas Domestic Helpers Association, said the raise was acceptable. “Inflation has limited impacts on the helpers because the employers offer them food and accommodation,” he said.

He added that the wage was still higher than that in Singapore and the Middle East, at HK$3,000 and HK$2,300 respectively.

But Teresa Liu Tsui-lan, managing director of Technic Employment Service Centre, said the raise should be HK$200 or HK$300 in order to draw more helpers as it was increasingly difficult to recruit them in the Philippines and Indonesia, now the two main sources.

Lestari said helpers would rather work in places that offered better wages. In Canada, the minimum wage for helpers was the same as for the locals, which differed among provinces but was about C$10 (HK$71) an hour. There are more than 300,000 helpers in Hong Kong.