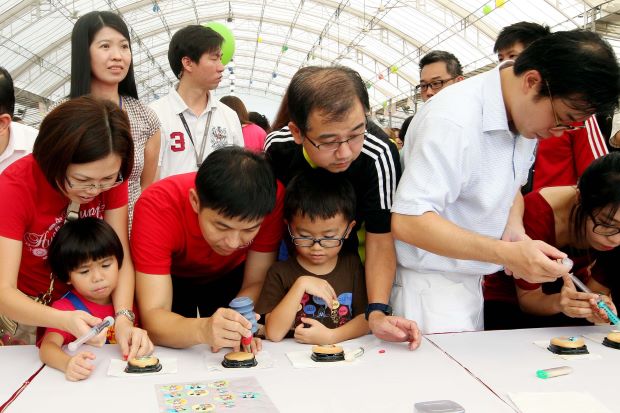 The framework, which takes effect next August, requires all firms to advertise openings on a government jobs bank before hiring skilled foreigners.

Tan was replying to a resident’s question at a dialogue in the Woodgrove division of Sembawang GRC during his first ministerial community visit on Sunday.

Oun Hui Ping, 38, applauded the new advertising requirement but worried that multinational corporations (MNCs) could exploit a “loophole” by bringing in foreigners as “transfer staff”.

Replying, Tan referred to the World Trade Organisation’s General Agreement on Trade in Services, and noted that intra-company transfers are subject to strict rules.

The worker must have been employed for at least a year beforehand and must be a manager, executive or specialist.

Transferred workers can stay for a two-year period, which can be extended by three years at a time up to a total of eight years.

But Tan also noted that many foreigners are not here under such transfers.

He argued that Singapore has to make it worthwhile for MNCs to be here, as they generate jobs, and a diverse work force is one attractive factor.

On the new framework, he said: “It’s one of those policies where there will be individuals who will feel that we’re not protecting Singaporeans enough.

“But my perspective is, we need to protect Singaporeans by generating jobs.”

Another question from a Benny Lim, 22, who asked what the “new normal” in politics means for front-line government staff or grassroots leaders.

Tan said that front-line staff will have a harder time as people are more demanding.

But even though “there might be good reasons why you are frustrated”, those are not good reasons to treat someone badly, he said.

A “new normal” does not mean accepting this, he said. “I think we need to push back and say this is not the society we want.”

Before fielding these questions, Tan also talked about how every resident can help to create his desired community.

“Imagine a community where people actually know each other. That’s what nation-building is,” he told some 100 residents attending the dialogue, and added: “It starts with you.”

He made this point after joining them for discussions on issues such as how to encourage residents to volunteer and new grassroots initiatives. — The Straits Times/ Asia News Network