Labour supply growth on a downturn 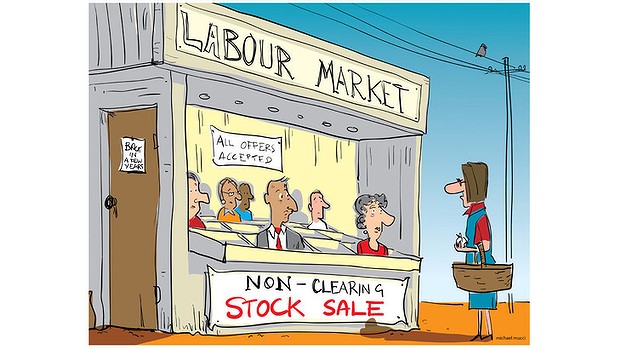 Labour supply growth on a downturn

Just about everyone assumes we can never have enough jobs. So it’s funny that our unending discussion about how the economy’s growth is doing rarely delves into the detail of what’s happening in the labour market.

But that’s what Dr Chris Kent, an assistant governor of the Reserve Bank, did in a speech last week. He shows it really is a market, with the demand for labour interacting with the supply of labour to help determine the price of labour (wages) and the quantity demanded (employment). Unlike textbook markets, however, this one never ”clears” – there’s always some labour left unsold (unemployment).

It shouldn’t surprise you that, in studying developments in the labour market in recent years, one big thing stands out: the effect of the resource boom as it moves through its three stages of high export prices, booming mine construction and rising production of minerals and energy.

The demand for labour is ”derived” demand – it flows from the demand for goods and services. To produce those things you need machines and workers. The more you produce, the more workers you need.

For most of the two years since the middle of 2012, the economy (real gross domestic product) grew at less than its 3 per cent annual trend rate, held back by the decline in mineral export prices, the decline in mining construction, the high level of the dollar and the weak growth in public demand (government spending).

A big part of the problem was that the downturn in mining-driven activity came at a time when the non-mining economy was subdued.

This below-trend growth in the production of goods and services meant weaker growth in the demand for labour, as we can see from the various indicators of labour demand.

The rate of unemployment is high relative to its recent history. The rate at which people of working age (15 years and above) are participating in the labour force, either by holding a job or actively seeking one, is at about the lowest it’s been over the past eight years. And since 2010 there’s been a significant decline in the ratio of employed people to the working-age population.

It’s true the economy seemed to grow more strongly in the last quarter of 2013 and the first quarter of 2014. And we can see some small improvement in the indicators. Using the trend estimates, employment grew by 0.7 per cent over the first five months of this year, unemployment seems to have stabilised at 5.9 per cent and the participation rate at 64.7 per cent.

But much of the growth in real GDP over the past two quarters has come from greatly increased production and export of minerals and energy, as newly built mines start working. Trouble is, mines are so capital-intensive that all this extra production would have created few extra jobs.

So, for once, the growth in real GDP overstates the increase in demand for labour. Kent suspects the growth in employment is explained partly by slightly stronger growth in the non-mining economy and by a catch-up from weaker-than-you’d-expect employment growth last year.

If so, we’re not out of the woods yet. And Treasury’s forecast is that unemployment will have risen a little further to 6.25 per cent by June next year.

But not everyone of working age chooses to participate in the labour force, of course. And, in practice, changes in the participation rate are a key indicator of the strength of labour supply.

Kent says growth in labour supply has slowed substantially over the past year or so, with the ”part rate” down from 65.1 per cent.

This is a sign of the interaction between labour demand and supply: when demand is strong, more is supplied, but now it’s vice versa. So it’s usual for the part rate to fall during periods of weak demand.

”As jobs become more difficult to find (at the prevailing wage), some individuals become discouraged from searching,” Kent says. If they are still available to work these people are ”discouraged workers”, many of whom will resume the search for work when conditions improve.

But Kent says that, since 2010, the rise in the number of discouraged workers accounts for only less than a quarter of the fall in the part rate. Some of these other people may have chosen to make themselves unavailable to work by embarking on a period of study or accepting involuntary early retirement.

But another, more structural, factor helping to explain the fall in the part rate is the ageing of the population. Ageing means a higher proportion of the population is in older age brackets which tend to have lower rates of participation. (And if oldies are still working, they’re more likely to be part-time).

Kent says ageing is estimated to have subtracted between 0.1 and 0.2 percentage points a year from the part rate over the past decade-and-a-half. But now the rate is a clear 0.2 points. In recent decades this purely demographic change has been offset by the decisions of individual oldies to continue working, but now this second trend seems to have stopped.

In textbooks, prices adjust automatically to bring supply and demand into balance. In the real-world labour market, it ain’t that simple. Even so, the weaker demand for labour has seen wage growth decline to well below its average over the past decade. Pay rises of more than 4 per cent are now far less common and rises of 2 to 3 per cent are more common than 3 to 4 per cent. So are rises of 1 per cent or less.