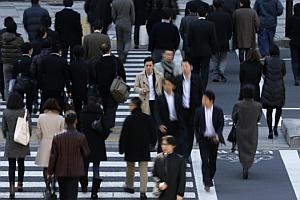 JAPANESE employers are proving to be less than enthusiastic in their response to Prime Minister Shinzo Abe’s calls for them to raise wages, so that personal consumption can in turn rise, helping to boost economic growth, data released yesterday indicated.

According to the Health, Labour and Welfare Ministry, wages earned by workers averaged 269,195 yen (S$3,300) in January, down 0.2 per cent from a year earlier and marking the first decline in three months, Jiji press reported.

While the January data may have been influenced by early payment of bonuses in 2013, it was not an encouraging sign that companies are prepared to raise basic wages in return for the boost that Abenomics and the weaker yen have given to exports and corporate profitability, analysts said.

The latest figures come as Japan enters the annual round of Spring wage negotiations known as shunto, in which unions are pushing for wage increases for the first time in many years after a long period in which price deflation and economic stagnation have forced them to settle for stable pay at most.