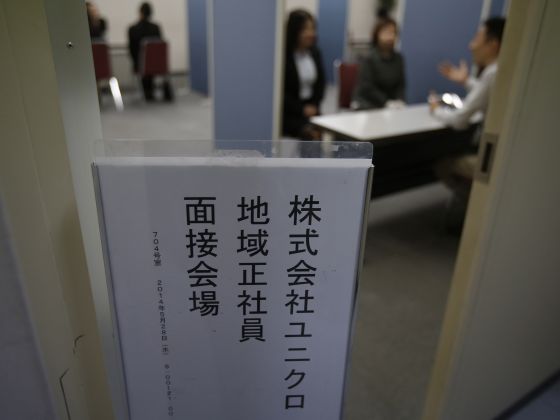 TOKYO – Don Quijote and Uniqlo, two of Japan’s best-known mass-market retailers, aren’t waiting for the government’s new growth policies due later this month before implementing their own labour reforms.

Fast Retailing , operator of Uniqlo casual clothing shops, is making many of its part-time workers into full-timers, at greater cost, to retain staff and boost productivity.

While some companies are coping by revamping practices established over decades of deflation, and perhaps hiking wages or raising productivity, others are having to curb operations or even shut down as staff become harder to find and to keep.

This worsening labour crunch could bring a reckoning for the recovery led by Prime Minister Shinzo Abe’s reflationary policies, with bottlenecks either forcing a breakthrough to a more efficient economy, or leaving the country mired in stagflation as companies’ costs rise and growth falters.

“The key is whether Japan can stimulate corporate investments to raise productivity,” said Yasuo Yamamoto, a senior economist at Mizuho Research Institute.

Growth bottlenecks, he said, could be a necessary step to transform Japan into an inflation-minded economy, weeding out businesses that exploit cheap labor and replacing them with more productive companies.

A draft of the government’s new growth plan obtained by Reuters this week includes calls on companies to offer more flexible options for full-time employment – similar to Uniqlo’s measures – to expand opportunities for women, and would create skill assessment standards to make it easier to change jobs.

But the draft plan, which is expected to be revised before it’s unveiled, lacks details on key reforms that companies have long sought, such as a corporate tax cut and exemptions for certain workers from limits on working hours.

“There’s a gap emerging between what companies view as necessary to boost business opportunities and the policies the government is offering,” said Hideo Kumano, chief economist at Dai-ichi Life Research Institute.

One company struggling under the low-wage, low-margin model is Watami Co , a nationwide chain of Japanese-style pubs that will close about 60 less profitable locations, or 10 percent of the total, in the year to next March in part because it can no longer afford to hire enough part-timers to properly serve its clientele.

Hiring costs such as job advertisements have jumped to around 9,000 yen ($88.46) per part-timer, three times what it paid in October 2012 before Abe took power, as workers become harder to find. The average hourly part-time wage has risen to more than 1,090 yen from about 1,030 yen in the same period.

The job market is tightening, with April data showing 108 jobs available for every 100 job seekers, the highest ratio in nearly eight years, according to government figures released last week.

Some companies are responding by rethinking their hiring and workplace practices to draw more workers and increase their productivity.

The company is also automating the printing of product information signs that guide customers through rows of shelves packed with merchandise from toilet paper to Rolex watches.

Uniqlo, Asia’s largest apparel chain, aims to boost the expertise and productivity of its workforce while curbing staff turnover by creating 16,000 new full-time positions, many likely to be filled by existing part-timers.

The jobs will be more flexible on transfers, a key issue for many women who would be reluctant to relocate away from their families.

While the job security and benefits extended to full-timers will mean higher costs for the company at least in the short term, it felt compelled to change as competition heats up to recruit workers, spokesman Keiji Furukawa said.

Uniqlo aims to boost full-timers to around 30-40 percent of its in-store staff from 10-20 percent now, and eventually to about half, Furukawa said. It also hopes the full-timers’ sales and merchandise expertise will help boost revenue per worker and per store.

While Don Quijote and Uniqlo, whose shares have both outperformed the Nikkei benchmark <.n225> since an Abenomics-inspired rally began in late 2012, push ahead with changes, many others are reluctant to invest in boosting productivity and attracting workers.