In China, managers are the new labour activists 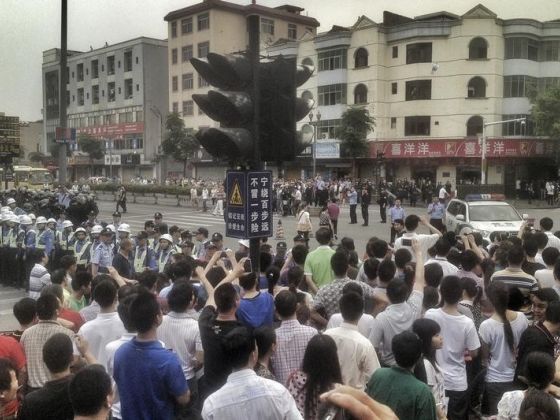 In China, managers are the new labour activists

A previously unpublished account from inside the strike at Taiwanese shoe manufacturer Yue Yuen obtained by Reuters shows that supervisors were the first to challenge senior plant leaders about the social insurance contributions that became the focus of the dispute. Yue Yuen Industrial Holdings declined to comment.

The involvement of managers underscores the growing complexity and unpredictability of labor relations in China. A generation of long-serving migrant factory employees is starting to retire just as the economy slows and the spread of social media makes strikes easier to organize.

Yue Yuen’s strike wasn’t the first time in recent years managers, rather than front-line workers, helped orchestrate industrial action in China. Managers were also involved in leading a strike at IBM’s facility in Shenzhen in March, according to a worker and another person briefed on the strike. IBM declined to comment.

Supervisors and other low- and mid-level managers also helped corral workers during a March strike at Shanmukang Technology, which supplies mobile phone cases to Samsung Electronics, a former employee said.

Managers have been orchestrating strikes during international deals for years, lawyers said. “It happens all the time” that managers encourage workers to strike during an international transaction that affects a company’s Chinese operations, said Jonathan Isaacs, special counsel with responsibility for Chinese employment and labor issues at law firm Baker & McKenzie in Hong Kong.

In many cases “the reason an M&A transaction, layoffs or restructuring goes sideways or causes labor unrest is that the local management were disgruntled and riled up the rank-and-file workers”, he added.

In November 2011, mid-level managers led thousands of PepsiCo Inc workers to strike in protest against the terms of the company’s acquisition by Tingyi Holdings, according to Hong Kong-based worker advocacy group China Labour Bulletin (CLB).

However, some of the largest recent strikes, including the Yue Yuen action, don’t involve a factory sale or restructuring.

Labor unrest has surged in China in recent months as slowing economic growth and rising costs have squeezed companies in industrialized areas like the Pearl River Delta in southern Guangdong province. CLB has recorded 319 strikes and labor protests since the beginning of the year.

Chinese factory disputes typically start with younger employees pushing management for higher pay. But in the last few years, as restructurings have become more common, managers have begun to take a more active role in negotiations and work stoppages because they have more at stake, lawyers said.

China’s 2008 labor contract law requires companies terminating employees to pay compensation worth one month’s salary for every year of employment. The longer an employee has been working at a factory, the greater the potential payoff from a closure, merger or restructuring.

Turnover at Chinese factories is high – reaching 100 percent a year in some companies. Younger workers spin through jobs quickly, sometimes staying only months in one plant. Managers can be among a plant’s longest serving employees.

“Strikes started by older workers often come about because of a change in the company, when a company is being merged or restructured,” says Dong Baohua, professor at the East China University of Politics and Law. “Older workers want to cash in on their years of service.”

Line managers may have information about organizational changes before rank-and-file workers. And they may use the threat of a work stoppage to motivate corporate leaders to improve managers’ pay or compensation, lawyers said.

Managers “are better at motivating and organizing others,” says Guangdong Labor Institute Deputy Secretary-General Yang Zhengxi, who noted that his observations were based on field research in a Sanyo electronics plant in Shenzhen in 2011. “But managers will always stay off the front lines in strikes, always be in a mobilizing role.”

According to the account compiled by a labor group, a supervisor first raised a complaint about the social contributions issue in late March, a few weeks before the strike began. The supervisor and colleagues spread word among workers, who then went to look up their social insurance contributions. The labor group requested anonymity to protect its relationship with Yue Yuen staff.

A Yue Yuen worker who would only give his name as Wang said low-level managers were involved in pressuring workers to return to work once the company agreed to their demands. The company told them they would go bankrupt if the workers did not compel the workers to go back to work, he said.

During the IBM strike, after a chaotic first day, line managers began to organize the workers, according to a worker who asked not to be identified.

Wu Xingcan, 28, worked on and off at South Korean-owned Shanmukang Technology between 2012 and last month. The March strike was triggered when the factory requested that workers contribute more to the social insurance fund in line with Chinese law, Wu said. After the strike began, group leaders and supervisors privately encouraged workers to stay off the production line. Shanmukang could not be reached for comment.

“The longer these people have worked in factories, the greater their interest in social insurance, and the more likely they are to incite other workers and participate in strikes themselves,” said Pun Ngai, sociology professor in the applied social science department at Hong Kong Polytechnic University.

At Yue Yuen, the common belief among roughly two dozen employees with whom Reuters spoke during the strike was that the social insurance problem came to light when a newly-retired employee went to collect her retirement benefit earlier this year. One worker told Reuters this retiree was Chen Yuchi, a senior employee who left the factory last year and is now living in central Hubei province.

In 1989, aged 26, Chen moved to Gaobu where the newly-founded Yue Yuen had just built its sneaker factory. She took a job, and in April 2013, after 24 years at the factory, retired as a manager. In August, after turning 50, she went to the social insurance office to collect her retirement benefit.

“It was only a little more than 600 yuan ($96). I thought, it’s so low. Nobody explained why,” she told Reuters by telephone last month.

Shocked, she returned to the managers’ dormitory and told former colleagues there. When Reuters reached Chen this week, she declined to discuss the issue further.