Helper moved to the fore as migrant workers’ champion 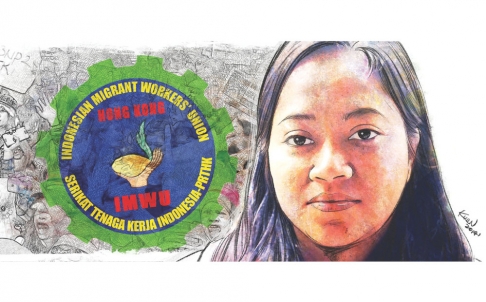 Helper moved to the fore as migrant workers' champion

When Indonesian domestic worker Sringatin arrived in Hong Kong 12 years ago, she had a simple dream of earning a decent living and helping her family.

Little did she realise that in just over a decade, she would be the public face for Hong Kong’s foreign domestic helpers.

As head of the Indonesian Migrant Workers Union (IMWU), she is the voice of some 150,000 Indonesian maids, half of the city’s helper workforce, and works tirelessly to campaign for their rights.

In the past fortnight, the 34-year-old has taken to the streets with a wave of supporters to fight for justice for Erwiana Sulistyaningsih, a 23-year-old Indonesian helper allegedly beaten and abused by her employer.

“As long as there is still suffering and abuse from agencies and employers, there is a need for a union,” Sringatin said.

The union has been working to push for a change in rules that force helpers to live with their bosses and to leave the city within two weeks of leaving their job, rules the union says leave helpers open to abuse. They also want a limit on working hours.

Since then, the IMWU has worked with its partners to put pressure on Hong Kong to ratify the convention.

Sringatin’s own story echoes the situation she is now battling to improve.

Born in a village on the outskirts of the city of Blitar, East Java, she was the youngest of six siblings. When she was six years old, most of her family moved some 1,800 kilometres away to East Sumatra. Less than a year later, her parents and two siblings died after contracting malaria.

With the financial support from her surviving siblings and grandparents, Sringatin managed to complete her primary and high school education. Yet university was out of the question “because it’s very expensive, and it is very difficult to get into a government-run one”. Instead, she took a year-long course in finance at a technical college.

“I thought if I had more skills, I would find a job after a shorter education,” she said. “In Indonesia, it is very hard to find good income, especially for women who live in villages and have no education.”

She left home at age 21, and worked for seven months as a maid in the hospitality industry. Her sister Siti, 35, who moved to Hong Kong in 1998 as a foreign domestic worker, suggested she work abroad, too.

“If you just stay in Indonesia, you’ll never get the best wages,” Siti told her. “You’ll never have your own house. It is better if you go abroad as a migrant domestic worker as the salary is very high.”

She had a choice of Singapore, Malaysia or Hong Kong. “In Singapore, maids had no holiday, and I was also afraid of the conditions in Malaysia,” Sringatin said. “I decided to go to Hong Kong because my sister was there.”

Aged 22, she left her village home for the third time. It took more than a month after her arrival before she could contact her sister after having problems with her new local employer.

“They underpaid me, and they didn’t give me my weekly day off,” Sringatin said, recounting her first experience.

“After my first deduction payment, I contacted my sister and told her I wanted to terminate my contract because I didn’t like working for my employer because they had already complained about my work.”

But her sister advised her against leaving, saying it would be hard for her to get a new job.

The agency also rebuked Sringatin. They said her bosses were not happy with her performance, and reserved the right to sack her.

Pressured into fulfilling daily demands such as washing at least three cars before lunch, she completed her two-year contract before swiftly moving on to a new job. In 2004, she joined the IMWU.

Since then, she has enjoyed working for three other households, who have supported her union activities outside of her primary job as a domestic helper – as long as she fulfils her duties.

Sringatin says many Hong Kong employers are reluctant to let migrant maids join a union. But the union will still help non-unionised workers, she says.

She hopes the campaigning will pay off in the long-term.

“When we campaigned against high agency fees in 2012, Indonesia’s manpower ministry changed the rules,” she said, citing an example that helped alleviate the large debts incurred by women wanting to be helpers.

Sringatin says whatever the issues, both Indonesian and Filipino domestic workers are speaking with one voice and are fighting for the same changes that will improve their working lives in Hong Kong.