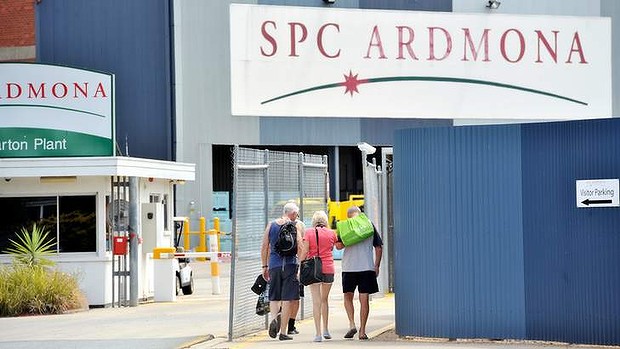 The Abbott government pressed SPC Ardmona to slash pay for workers by as much as 40 per cent under a radical bailout plan for the food processor.

Three union officials told Fairfax Media they had meetings with SPC Ardmona managing director Peter Kelly before Christmas in which Mr Kelly said he was being pressured by the Abbott government to put workers on the award if the company wanted a $25 million subsidy.

Moving workers on to the award would have dramatically cut living standards for hundreds of people at the Shepparton plant, with pay cuts of $20,000 to $30,000 a year for many. Other sources involved in the restructure have separately confirmed to Fairfax Media the Abbott government’s pay push at SPC Ardmona. Industry Minister Ian Macfarlane refused to directly answer questions on the issue.

The government has been pushing struggling companies such as Toyota and SPC Ardmona to overhaul their workplace agreements as it has repeatedly warned about high wages, which has become a key political issue. That is despite the wage price index growing at just 2.6 per cent last year, the slowest growth in the 16-year history of the series.

Mr Macfarlane said on Wednesday costs had to fall. ”I do want to reduce labour costs but it’s not necessarily reducing wages,” he said.

”If we boost our productivity, if we increase the number of units that a person produces, then wages can remain stable but we do have to have competitive working conditions and we do have to make sure that some of the things that have happened in industry in Australia in the past are addressed.”

Treasurer Joe Hockey said costs were too high. ”We do have a high Australian dollar. We’ve got to reduce our costs of making things in Australia,” he said.

ACTU secretary Dave Oliver said Australia was in a ”job security crisis” with thousands of jobs lost and wages growth slowing. ”Meanwhile, under the banner of a so-called ‘wages blowout’, the Abbott government has blamed every economic fallout on workers.”

Electrical Trades Union state secretary Troy Gray said the SPC Ardmona boss had told him he’d had meetings with senior government figures including Mr Macfarlane. ”Kelly said to me the government has made a demand that workers be put on the award; he said, ‘I don’t think the government understands what that means’ … after he [Kelly] explained it to the government it was clear they understood it would mean a pretty severe reduction in wages.”

Mr Gray said the government was trying to push through industrial relations reform by pressuring distressed companies to slash wages and conditions in exchange for financial support. ”This is WorkChoices mark 2 by stealth; it’s disgusting to be honest.”

Australian Workers Union state secretary Ben Davis, who had a separate meeting with the SPC Ardmona managing director, also confirmed that Mr Kelly had said he had been pressured by the Abbott government to put workers on the award.

Another union official who met Mr Kelly in mid-December, the ETU’s Damian King, confirmed the same. He said the union had offered a two-year wage freeze to try to keep its members in work but SPC Ardmona said it would cut 73 maintenance staff and outsource the work. ”Kelly said he was trying to impress them [the government] by contracting out.”

SPC Ardmona spokeswoman Sally Loane declined to comment about workers being moved to the award. ”We have no comment to make about private conversations with any stakeholders.”

Labor’s employment and workplace relations spokesman, Brendan O’Connor, said Prime Minister Tony Abbott had previously attacked publicly the ”modest pay and conditions” of SPC workers. ”Mr Hockey has made it clear that he supports a race-to-the-bottom approach to workers’ wages and conditions in this country,” Mr O’Connor said.

After the government refused to provide $25 million to SPC Ardmona – citing ”extraordinary” workplace conditions at the plant – it was attacked by local Liberal MP Sharman Stone, who accused Mr Abbott and Mr Hockey of ”lying” about workers’ conditions.

The state government soon after committed $22 million to refit the processing plant, with SPC parent company Coca-Cola Amatil offering $78 million as part of a $100 million package.