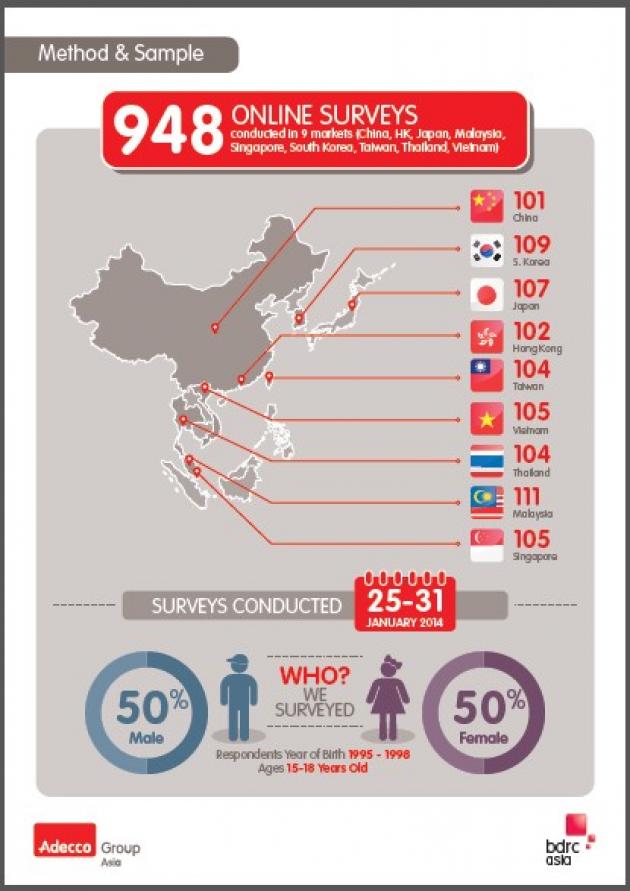 Young people, dubbed as Gen Z, in Southeast Asia, are more confident than their counterparts in Greater China and North Asia about how well their education will prepare them for the workplace, according to a survey.

Adecco conducted 948 surveys with Gen Z – those aged 15-18 years – across 9 countries in Asia, comprising an equal mix of male and female respondents in China, Hong Kong, Japan, Korea, Malaysia, Singapore, Taiwan, Thailand and Vietnam. The survey assessed Gen Z’s ambitions, their employment preferences, their attitudes to the workplace, and how optimistic they are about the future.

“The findings show that the next generation of workers in Asia are going to be more entrepreneurial in how they approach the workplace and will want things to happen ont heir own terms – especially in regional markets where talent or specific skills shortages are prevalent,” said Christophe Duchatellier, CEO, Adecco Asia.

“The survey reveals some interesting geographical differences – from North to South Asia – in how Gen Z view work and the factors that influence how and when they will work.”

The survey showed that Gen Z will not rush into employment – many will go to university (including some with an appetite for taking higher degrees) and among those graduating most expect to take 6-12 months before they find their ‘preferred employer’. This means that Gen Z will most likely seek casual, or temporary employment, to give them more time to look and to ensure that their first full-time employment is with an organisation that really meets their career needs.

Social media will be important in shaping their choices for employment. 26 per cent of Gen Z state they will use social media to seek advice on careers, and 50 per cent will use career related websites to obtain information on specific companies that they are looking at joining – which is not surprising given that they typically spend 2-4 hours every day on social media.

Gen Z is willing to invest in their future – the majority are prepared to take a lower salary in their first employment to get better training and experience. However, they are less willing to trade off salary to get a ‘big name’ employer on their resume, demonstrating that lesser known companies who can give a wider range of experience, combined with a more fun and interesting working environment, will be able to attract Gen Z over some larger, big name corporations.

Most of Gen Z take responsible attitudes towards planning for their future, shown by their intention to commence pension planning early on in their working lives. Gen Z is optimistic

With Asia being the world’s growth region, optimism is prevalent with most of Gen Z thinking

that they will be better off than their parents within their lifetime. No more so than in Southeast Asia and in particular in Malaysia, Thailand, and Vietnam. For Gen Z, they see that economic growth is creating opportunities that were not available to their parents, and this manifests itself in more choices. Notably, most of Gen Z has a preference for working in service industries, e.g. advertising, marketing, consulting, media, hospitality, the professions, as well as in arts, sports and entertainment.

Very few of those surveyed show interest in the more traditional industries, such as manufacturing, with fewer wanting to work in the wholesale trade – traditionally the backbone of industry in some Asia markets.

Gen Z is entrepreneurial – that is clear from the findings. About 30 per cent state that running their own business ‘definitely appeals to them’, with another 40 per cent who might consider entrepreneurialism ‘if the right opportunity arises’. They are also confident about keeping up with changing technology and it is in the area of technology itself that Gen Z expects to have the biggest changes in the workplace, generally being able to make work ‘more convenient’ for people, e.g. working remotely.

Of those who might consider entrepreneurialism and starting their own business, about half will consider this in their 20’s, and a similar number will do this as a start-up rather than taking over an existing business such as a family enterprise, particularly so in China and Taiwan.

Despite this, society will still be able rely on its public servants in the future. 40 per cent of Gen Z

will consider working for the Government or public sector, and in fact about 20 per cent state that this will be their preferred type of employer after leaving education (although this is skewed more towards responses from Southeast Asia).

And for many Gen Z, ‘job security’ ranks as the most important employment attribute, with

many still preferring full-time employment. This is indicative of Asia’s low rates of unemployment, with under-employment existing in some regional markets.