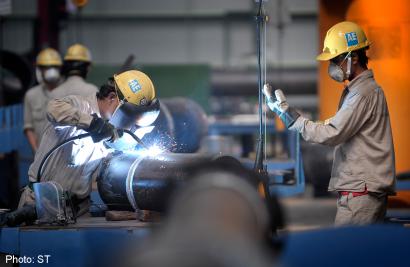 SINGAPORE – The further tightening of foreign worker inflows in Singapore last year may have resulted in some firms downsizing and others relocating elsewhere, but the policy changes did produce some positives too.

A new survey has found that one in two companies here said they ended up recruiting more locals, while a similar proportion said they sent their workers for upskilling and put in place measures to improve their productivity.

About a quarter of the 1,014 firms polled by the Singapore Business Federation (SBF) for its latest National Business Survey said they invested in automation or upgraded their operations. About 19 per cent of them made use of outsourcing or shared services in order to cope with the reduced foreign manpower, the survey found.

The government’s ongoing effort to moderate the growth of the foreign worker population did force some companies to bite the bullet, however.

About 15 per cent of them reported downsizing their companies in 2013, while 11 per cent said they ended up moving their operations out of Singapore to cheaper locations.

While this may be viewed as a sign of how small and medium-sized enterprises are struggling to cope with the tighter foreign labour supply, SBF chief executive Ho Meng Kit prefers to see things from a different perspective.

“I wouldn’t be unduly alarmed because this is reflective of the dynamic nature of our economy,” he said at a briefing on Jan 14. “In any economy, there should be some healthy restructuring. There will be some percentage of people who cannot make it… and they should relocate and free up resources.”

Many Singapore companies, he added, are actively thinking of moving overseas in order to boost their competitiveness, both locally and across the region.

Mr Ho noted how 5 per cent of those surveyed by SBF reported already having a presence in Malaysia’s booming economic growth corridor Iskandar, while 9 per cent were exploring the possibility of investing there.

Meanwhile, in a separate survey conducted by the Association of Small and Medium Enterprises (ASME), nearly 70 per cent of SMEs here hope that next month’s Budget will include measures to help them in hiring Singaporeans. ASME has called for more incentives to be given to Singaporean employees who work for SMEs and more benefits to be offered to bring retirees and mothers back into the workforce.

Manpower shortage, however, will continue to be a “substantial challenge” for SMEs to overcome in the coming months.

The association said that while Singapore’s economy was almost at full employment, there may exist “pockets of local talents” who are under-employed or could be further trained to take on more meaningful jobs. “Overall, businesses are generally optimistic about the business outlook in the next six months despite recognising that the landscape will remain tough.”