Etiquette lessons for staff with colleagues with disabilities 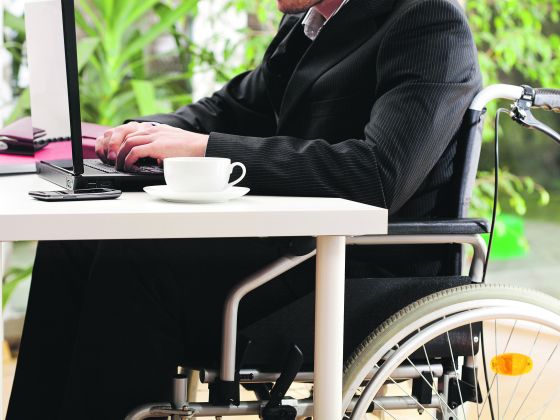 Etiquette lessons for staff with colleagues with disabilities

SINGAPORE — Should one speak louder when talking to a person using a hearing aid and is it okay to say “see you later” to a visually-impaired person? These were some of the disability etiquette questions that were addressed in a workshop aimed at helping colleagues of people with disabilities (PWDs) better work with them in the office.

The answers? No, a person would have adjusted his hearing aid to the right volume and yes, “see you later” is a socially acceptable term to use, said trainer David Tan, who has five years’ experience in helping people better interact with and understand PWDs as well as in addressing common misconceptions people hold.

Fifteen staff from various companies that have hired PWDs attended the first Disability Management Workshop, a monthly full-day course run by SG Enable. The workshop explains the various kinds of disabilities, how companies and technology can support employees with disabilities, as well as etiquette to keep in mind when interacting with PWDs, among other topics.

It is among the programmes that companies can receive funding for under the recently-enhanced S$30 million Open Door Programme (ODP), which provides subsidies for companies that hire PWDs in a bid to encourage such employment.

One common mistake, Mr Tan said, is to think that every PWD needs help and thus extend sometimes uncalled-for assistance. “Many PWDs are very independent and are proud of it,” he said.

The trainer highlighted the example of his wheelchair-using son and able-bodied daughter to the class — his son can cook and do the laundry, while his daughter cannot boil water.

“The ‘disability’ in PWD is already generalising and it is how the public sees someone with a disability. The focus is on the ‘not able’ rather than the abilities,” he said.

Everyone, he said, has some form of “un-ability” and people should be noticed for their abilities.

At the workshop, which was held last week, Mr Tan also had participants take part in exercises to demonstrate some of the subtle etiquette that many might not have thought of before interacting with a PWD.

For example, participants were paired up and one partner would close his eyes and allow himself to be led across the room by his partner, while holding on to his elbow.

Only after they performed the exercise did participants realise that when leading the visually-impaired, it is not only more comfortable for the PWD to be a step behind, but that walking behind also lets them anticipate if one is heading up or down steps.

The full-day workshop is for human resource executives or a PWD’s direct supervisor in a company. Those looking to learn more about working with PWDs can also arrange for a Disability Awareness Talk over lunch at the workplace or a Disability Etiquette Workshop customised specifically to a company’s needs.

The workshop is currently free. SG Enable is looking at developing other courses for colleagues of PWDs, for which the ODP can be tapped for subsidies of up to 90 per cent.

One of the participants, human resource manager Angela Goh, who last Monday hired an administrator with an intellectual disability and depression, said the tips picked up at the course were useful.

“We thought we could slowly let her figure out her duties, but didn’t realise that we had to break the steps down and go bit by bit. (We have) to let her sort, then tell her to file — we can’t tell her to sort and file at the same time,” she explained.

Before she began the course, she had been worried about her ability to work with PWDs, such as how to communicate with them, involve them in the workplace and persuade her staff to accept their presence.

Ms Goh found the course so useful that she has since planned to enrol all the new hire’s colleagues in her department for the same workshop. Her company, she said, is also open to hiring more PWDs.