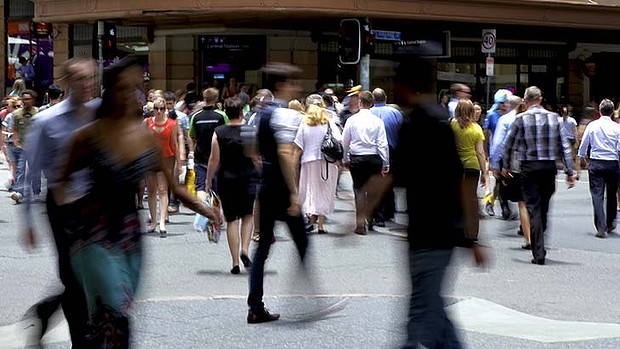 People earning up to $80,000 will soon face tax rates of up to 40 per cent unless the government addresses bracket creep, accounting firm PwC says, highlighting the urgent need for tax reform.

A PwC report, to be released on Monday, says people on about $80,000 would be worst hit and forced to give the government about 40 per cent of every dollar earned.

“With bracket creep you are going to have a large number of working Australians worse off,” PwC managing partner tax Tom Seymour said.

“They will have less real income to spend on food, education, health and housing as inflation goes up.”

The report follows comments by Treasury secretary Martin Parkinson, who said two weeks ago that the average full-time employee will be paying tax of 39¢ in the dollar by 2015-16, up from 31¢ in the dollar in the first decade of this century.

The PwC report How do we fix a tax system? said without changes in government spending combined annual deficits of federal and state governments would rise from $40 billion now to $237 billion by 2040, and $627 billion by 2050.

While the Abbott government was cutting spending, the report said this would not be enough to stop deficits growing. Tax reform was a key part of growing the economy, and thereby revenue.

The report said the former government failed to create a “mandate” for change and gave the Henry Tax Review and subsequent Business Tax Working Group narrow terms of reference.

“If you want tax reform, you have to bring the community along with you,” Mr Seymour said. “Otherwise you have a bunch of policymakers siting in back room coming up with ideas that are not sellable“.

The report also criticised the previous government for not allowing a full mix of taxes, including the GST and super, to be included when policymakers were assessing options to make changes revenue-neutral.

The report also suggested the Abbott government set up an independent panel similar to look at tax issues. This approach was used by the New Zealand government as part of its successful tax reform process in 2010.

The PwC report comes as Treasury is expected to deliver a discussion paper or “green paper” canvassing options for tax reform before the end of the year.

The Treasury paper will include a “data dump” from the Henry tax review and Australian Bureau of Statistics in terms of the budget impacts of potential tax changes.

Parliamentary Secretary to the Treasurer Steven Ciobo told the Tax Institute’s national conference last month that the government would “consult and engage extensively with the community” in developing the white paper.

“As part of this process, we intend to release an initial discussion paper inviting comments from the public,” he said.

All Australians would be able to have their say on the discussion paper, Mr Ciobo said, and any proposed tax changes flowing from the white paper would be put before voters at the next election.

A spokesman for Treasurer Joe Hockey said the government would canvass options for the white paper, but would not comment on the timing.

In its company tax policy released before the election, the Liberal party promises to release the modelling behind the Henry Review to “enable an open discussion about the future of Australia’s tax system”.

“We would then seek a second-term mandate for a further tax reform agenda by releasing a comprehensive White Paper on tax reform prior to the next federal election,” the policy says.
Source: theage.com.au