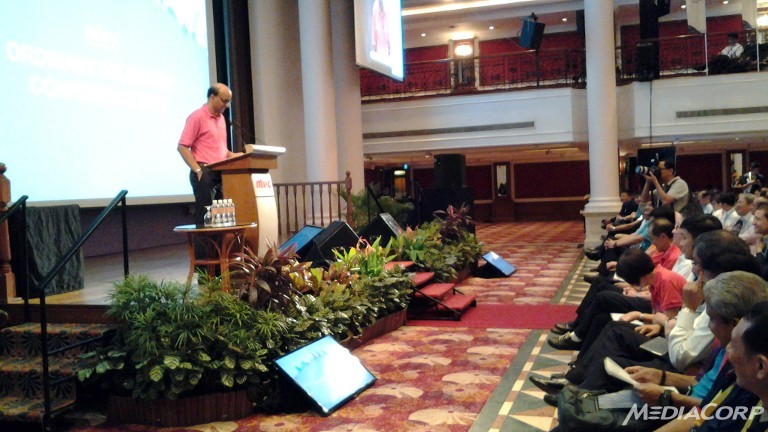 He outlined three strategies to ensure this success continues.

The three strategies are by building a thriving and competitive economy, enhancing productivity growth, and ensuring Singapore remains an inclusive society through its social policies.

NTUC last held its National Delegates Conference in 2011, and this year’s conference is an opportune time to take stock of how Singapore’s workforce has fared in recent years.

Mr Tharman said the government has been working to build an inclusive society and workers are at the core of this effort, which has made the tripartite’s role even more important in Singapore.

He said: “What we have achieved is not normal amongst countries in the same league as us, and first of all, it means that we must be doing some things right.

“We can’t be doing everything wrong, because (otherwise) we would not be in this very unusual situation of having low unemployment and significant income unlike all the other economies.

Singapore stood out with having the lowest unemployment rate of three per cent and a real median household income growth of nearly 18 per cent, in the last five years.

Outlining the three strategies to ensure continued progress for the Singapore workforce, Mr Tharman said Singapore has to firstly build a thriving and competitive economy with opportunities to bring in new, high-quality investments that can create better jobs, and take advantage of the rising middle class in Asia.

“So a growth strategy which remains relevant, staying competitive and taking opportunities, that’s the first plank.”

Another key strategy to improve the income levels of workers is to enhance productivity.

Mr Tharman said productivity growth remains weak over the past few years and there is a need for everyone to work harder to improve it.

Some of the key sectors which need to see improvements in productivity growth, he said, include construction, logistics and the retail sectors.

Mr Tharman said: “One of the things we are doing is, of course, to help every firm to upgrade and every worker to upgrade. We will be as aggressive as it takes to support upgrading on the job, outside the job and upgrading by the firm.

The third strategy is that the government must ensure that Singapore remains an inclusive society through its social policies.

Mr Tharman emphasised that the government has taken many measures to address the concerns of low wage workers, older workers and the PMEs.

“And that’s why we are actually spending a very significant amount now on social spending to support families at the lower end of the income ladder. “

Mr Tharman said the measures taken to support low income families are not just through ComCare and schemes of such nature.

“If you add up what we spend, through Workfare, through our housing grants, through our healthcare subsidies as well as ComCare and the other schemes, we spend S$1.3 billion of our Budget each year. Last year it was S$1.3 billion — that figure goes up over time… S$1.3 billion just on the bottom 20 per cent of households.”

“This is not a small-minded government when it comes to supporting the poor. We have been very active in supporting them where it counts — support the culture of responsibility and work, that’s our strategy,” said Mr Tharman.

But he acknowledged that some jobs remain stuck at the low-wage level.

NTUC has proposed a Progressive Wage Model to address this.

Stephen Lee, president of Singapore National Employers Federation, said that the federation fully supports the progressive wage system and is working with NTUC to implement the model.

He said: “We think the Progressive Wage System offers a progression of both skill and salary, and so it is better than just a minimum wage which is just one point.

“We are working with NTUC on implementing this on an industry by industry basis, and where we can have different progressions for different industries — fitting the skills and the ability of the workers.

“The Progressive Wage System also helps the retention of workers, where you can give workers a future and a career.”

And while there will continue to be schemes, incentives and subsidies to help businesses and workers, DPM Tharman also emphasised that there should also be focus on respecting workers in every vocation and urging them to take responsibility to upgrade themselves.