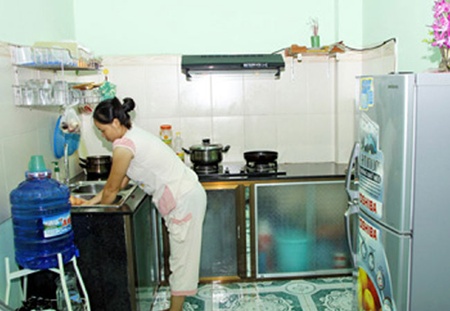 HA NOI (VNS)— Many domestic workers needed special vocational training to meet the current demands of the job in big cities, according to experts.

Ngo Ngoc Anh, director of the Research Centre for Gender, Family and Community Development, said many workers were from rural areas, unemployed and often lacked the skills to do housework or take care of the elderly and children.

However, she said not many career introduction centres had the ability to arrange training. They usually only handled those who had working experience and introduced them to prospective employers.

Anh said some centres had organised quick courses for middle-aged women, but achieved little because of a lack of know how.

For example, about 110 labourers took a week-long vocational training course in a centre in northern Phu Tho Province, but only one-third met the centre’s requirement that trainees have experience with modern machines.

Tran Duc Day, head of the Hai Phong-based Industrial Career and Tourism Vocational Training Centre, said the need for facilities to train professional domestic workers was urgent, but there were no standard curriculum in the field.

“Many centres, including us, must bear the responsibility for devising a course and its content,” he said.

“However, the effectiveness of training will be restricted until an official curriculum is launched.”

Day said that as far as he knew none of the vocational training centres in the city had courses on the subject.

Tran Manh Hung, head of a private career introduction centre in Ha Noi’s Trung Kinh Street said the demand for domestic helpers in Ha Noi was remarkably high. His centre supplied about 30 persons a month, but there was always an urgent need for more.

Hung said he usually hired students, graduates, retired people and middle-aged women to do the job, but there were not enough to meet demand. However, he said only a few could do the work smoothly and professionally.

“These people prefer going to work in Taiwan, Malaysia or Saudi Arabia as they can earn up to VND8.4 million (US$400 plus) a month and have all their insurance paid,” he said.

Figures from the centre show that by the end of next year, the number of domestic workers would be 63 per cent above that of 2008 – from 157,000 to 246,000. Most of them will be women. Most employers get their domestic workers from their acquaintances instead of asking professional centres. There are no checks on quality or competence.

Nguyen Thu Trang, from Ha Noi’s Tay Son Street, said she was willing to pay more to get skilful and disciplined people as she was tired of replacing domestic workers twice a month.

“Few know how to do the housework. It takes them at least a month to get used to my family’s daily schedule and habits,” she said.

Experts in the field said that an official outline of job training and specific criteria for granting certificates, would help vocational centres build identical training programmes.

They agree that this should be done before the Law on Labour is launched in the near future.