Chart of the Day: Most Singaporean professionals received 1-4% pay rise over the past year 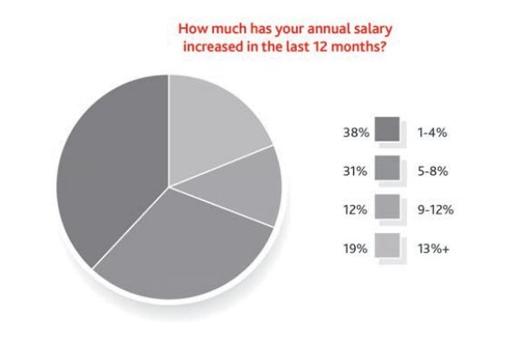 Chart of the Day: Most Singaporean professionals received 1-4% pay rise over the past year

Singapore’s professionals expect their pay to rise every year, and some are not disappointed.

According to Morgan McKinley, majority (73%) of the Singaporeans they surveyed say their salary has increased over the past year.

However, almost one quarter (23%) say they have had no pay rise at all. Four percent of professionals who responded say they have experienced a pay reduction over the last year.

The Morgan McKinley survey also says that out of those who received an annual salary increase, the overwhelming majority (76%) say it was as a result of meeting their own personal key performance indicators (KPIs). Just over half (52%) of respondents say the increase can be attributed to group or company performance. Twelve percent say the increment is due to exceeding personal sales targets. Other reasons cited for pay rises include promotion, change of job, completing the probationary period, and CPI adjustment.