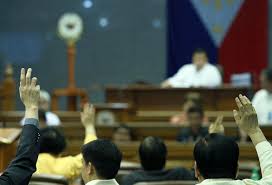 MANILA, Philippines – The Senate has approved on second reading the bill that seeks to increase the tax exemption limit for workers’ 13th month pay and other bonuses.

Angara said Sen. Ralph Recto was right in introducing the amendment, which used the correct figure consistent with the inflation rate.

“In fact, the same figure was given by [Bureau of Internal Revenue] Commissioner Kim Henares in one of the hearings when she said that P30,000 in 1994 would be worth around P82,000 today,” Angara said.

Recto noted that the figure came from the National Economic Development Authority, using the inflation rate as of October this year.

Enacted in 1994, Republic Act 7833 mandates that private and public employees’ 13th month pay and other benefits, such as productivity incentives and Christmas bonuses, not exceeding P30,000 are exempted from tax.

“In order for this injustice not to happen again because we left our system unchanged and outdated, our proposed measure mandates that adjustments be made every three years after the effectivity of this law, taking into account inflation,” Angara said.

Besides Recto, Senate President Franklin Drilon also added an amendment to the bill stating, “the failure of the Secretary of Finance to promulgate the necessary rules and regulations shall not prevent the effectivity of the law.”

If the bill is passed into law, the Department of Finance expects to lose over P30 billion in revenues.

Various experts, however, deemed the projected loss a bloated figure. During the committee hearings on the pending measure, they estimated the revenue impact to be in the range of P3 billion only.

The bill is expected to benefit approximately half a million employees.

“Given that all of our colleagues in the Senate expressed their willingness to be co-authors of the bill, it clearly indicates that we all want our deserving taxpayers to benefit more from the fruits of their labor–a wonderful Christmas present to our hardworking Filipino workers and their families,” Angara said.

Drilon, meanwhile, said the measure may not be implemented this year due to time constraints.

The Senate leader assured that the proposed law will benefit Filipinos starting next year.