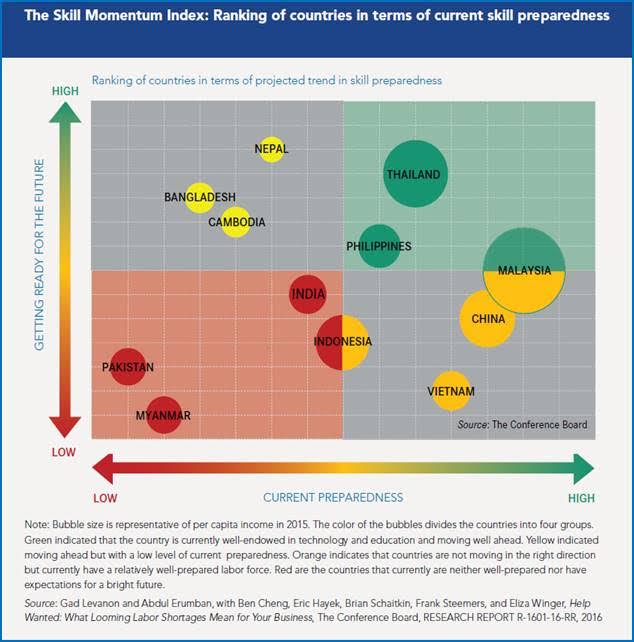 Asia’s emerging economies face severe skills shortage, as in comparison to advanced economies. A new report from the Workforce Analytics Institute (WAI), a partnership between The Conference Board and Mercer, titled Deciphering Labor and Skill Shortages in Asia with Workforce Analytics, states that emerging economies in the region face a severe lack of supply of skilled labour in the near and medium term on account of less-than-adequate skills-based education and changing workforce demographics despite the availability of large working-age populations.

Skilled labour is in high demand across Asia but workforce preparedness varies widely across the region. Singapore has the highest proportion of high-skilled workers in Asia, representing more than 50 percent of the employment share, and at the other end of the spectrum Bangladesh has one of the highest proportions of low-skilled labour, with over 40 percent of the population involved in low-skilled work.

Comparisons between relatively advanced economies (Singapore, Hong Kong, Japan, and Korea) and the emerging economies (Malaysia, Thailand, the Philippines, Indonesia, China, India, Vietnam, Nepal, Bangladesh, Cambodia, Pakistan, and Myanmar) show that the share of the educated population, particularly the share of the tertiary- or postsecondary educated population, is considerably lower in emerging economies despite a considerable proportion of the GDP being invested in education.

This dichotomy across the region has also resulted in supply-side imbalances, with increased mobility of skilled workforce when compared with the larger low-skilled populations in the emerging economies.

The Conference Board illustrates the large variations in workforce preparedness across 12 economies in Asia with the development of the Skill Momentum Index, by combining expected trends in the urban labour force with trends in several educational and technology indicators.

Dion Groeneweg, Partner and HR Transformation & Workforce Planning Leader for Growth Markets, Mercer commented on the report, “Multinational organizations continue to set their sights on expansion and growth in Asia. To do this they need to understand the nuances of the different markets – including the specific talent concerns. Our research shows, for example, that among Chinese and Indian workers, career advancement is the main reason motivating employees to leave their organization. Yet on the other hand, base pay heavily impacts attrition rates in advanced economies such as Singapore and Hong Kong.”

Caitlin Pan, Ph.D., Senior Researcher, Asia Region of The Conference Board and the author of the report said, “Organizations need to understand their key challenges and make their decisions based on evidence and facts. Through this internal data, human resources are better able to justify their decisions and garner key stakeholder support. Successful organizations marry internal data with external sources of data to aid their decision making. Only with comprehensive knowledge of both of these can organizations make effective strategies to suit their firms.”

Over the next decade, the working-age population will decline, partially due to China’s one-child policy implemented from the late 1970s till 2015. The lifting of the one-child policy may increase the size of China’s working population, although it will take years for the full effects of the policy reversal to become apparent.

While the movement of the workforce from rural to urban regions will add to the overall availability of workers in urban centers, highly skilled labour will remain scarce. This is because migrant workers from rural areas, lacking both technical and soft skills, usually fill menial, low paying jobs in cities rather than skilled ones.

Moreover, as China’s economy matures, it will no longer be able to depend on cheap labour to fuel its growth, but will require skilled workers that demand higher wages. The demand for skilled labour is set to grow over the next few years, with the demand for workers with a university education or vocational training far exceeding supply.

Although higher salaries are desired by workers, higher pay may not necessarily be the only means of enticing workers to stay. Organizations need to focus on alternative means of retaining workers by providing career advancement or training opportunities.

Unlike China, India’s working-age population is set to grow over the next decade. Although India has a young population, only about 2 percent of the workforce is skilled, in contrast to countries like South Korea and Japan, where skilled workers represent 96 and 80 percent of the population respectively. This lack of skilled labour is likely to severely hinder India’s ability to develop.

To deal with labour issues, employers in India may need to consider recruiting more female employees. At the moment, the Indian female labour participation rate is only 25 percent, one-third that of males. Improvements in tertiary and vocational education infrastructure are much needed as well.

Similar to India, Indonesia has a young population set to grow over the next decade with more than 63 percent of its population below age 35. Like many other emerging nations in Asia, Indonesia lacks skilled labour.

Currently, only 4.1 percent of the population has post-secondary or tertiary education. From 2012 to 2030, the need for skilled workers in Indonesia is forecasted to grow from 55 to 113 million. This step-up in demand for approximately 58 million workers will put immense pressure on organizations seeking to build their talent pool in Indonesia.

Organizations seeking to address skill shortages in Indonesia should place greater focus on employee training. However, organizations should recognize that highly trained internal talent will be sought after by other firms, and hence, the organisations will need to put in place additional incentives to retain their trained workforce.

Over the next decade, the working-age population of the Philippines will continue to grow, and its current position on the Skill Momentum Index suggests that the country will be able to effectively deal with upcoming skill and talent challenges.

Unlike Indonesia, the Philippines have been more successful in providing access to education. But similar to China, India, and Indonesia, it too faces a shortage in highly skilled labour. High migration rates may have contributed to its skilled labour shortage. Thus, organizations seeking to address their talent needs may try to expand their talent sources by attracting migrant workers returning from overseas and local workers considering migration.

Companies will have to deploy evidence-based workforce strategies and robust upskilling processes to be able to address the skill shortage.