A call for more female execs 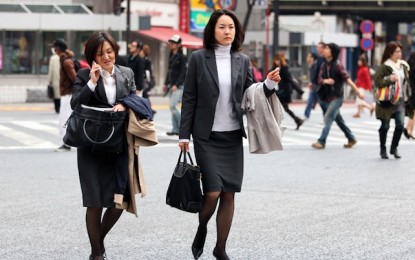 A call for more female execs

Keidanren has asked its member businesses to draw up plans to promote women to executive posts to compete better with their rivals, senior official Junko Nakagawa said in a recent interview.

Japan’s largest business lobby told members in April that their voluntary action plans will be put on its website, although it did not set numerical targets for them, according to Nakagawa.

“We hope companies will look at each other’s plans and review their own personnel strategies,” she said.

Nakagawa, who heads a Keidanren panel for expanding the role of women in work, explained that the lack of numerical targets was “not out of consideration for businesses opposed to targets but reflected the view that it is appropriate and effective.”

Keidanren hopes businesses with few women employees, which are therefore not in a position to easily promote them to executive and managerial positions, will also have the opportunity to make their own strategies and improve corporate value, Nakagawa said.

“Members of the federation have shown no particular objection (to disclosing their plans online) because the companies, regardless of size, are aware of the importance of the issue,” said Nakagawa, who concurrently serves as senior managing director at Nomura Holdings Inc.

“Panel discussions have focused more on means of disclosure that will better convey corporate efforts to the public and their employees,” she added.

She added that she hopes Keidanren’s call for action plans to address gender inequality will persuade businesses to overhaul their operations, such as by improving efficiency and reviewing business practices, by assigning women to posts filled traditionally by men.

Keidanren is moving in line with the goal set by Prime Minister Shinzo Abe of boosting the proportion of leading positions held by women to at least 30 percent by 2020. Promoting women in the workplace is seen as key to Japan’s economic growth strategy.

“From now until 2020, what is more important is for everyone to take action toward the goal, rather than the numerical target of 30 percent itself,” Nakagawa said.