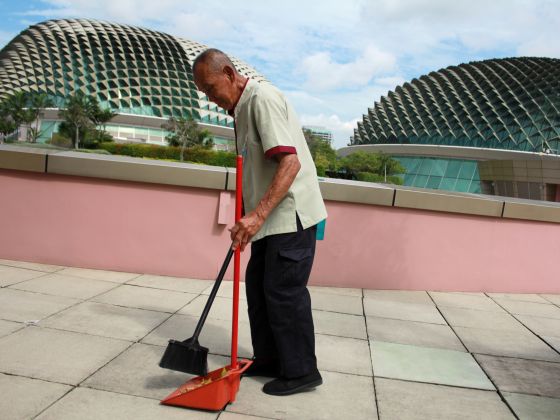 SINGAPORE — One thousand and one cleaning firms have received licences from the National Environment Agency (NEA) so far, allowing them to continue operating as a mandatory licensing scheme for the industry kicked in yesterday.

These firms currently hire about 52,000 cleaners, of which about 33,000 had been trained by the Singapore Workforce Development Agency (WDA) in skills such as using machinery to sweep roads and clean floors, in a bid to raise productivity.

Under the licensing regime, which was introduced in January, firms have to ensure that at least half of their workers are trained in at least one relevant module under the WDA’s Singapore Workforce Skills Qualifications (WSQ) framework. To renew the licence — required annually — all workers in the firm must be trained. The licensing conditions also require firms to pay cleaners an entry-level wage of S$1,000 a month.

The National Trades Union Congress (NTUC) and the authorities said more than 26,000 resident cleaners in the licensed firms will be paid according to the Progressive Wage Model, which has already led to higher wages for some.

In the weeks leading to the effective date of the licensing regime, firms had told TODAY of counterparts shutting down after failing to send enough workers for training. Reasons given included their inability to send enough workers for training due to small headcounts, and reluctance from older, uneducated workers who feared being unable to keep up.

It is not known how many cleaning firms folded before the mandatory regime took effect.

The NEA said no licence applications had been rejected so far. TODAY understands that two unionised firms did not apply for the licence, choosing to leave the industry instead, as business was poor.

NTUC secretary-general Lim Swee Say said the labour movement is talking to the Infocomm Development Authority about putting in place a “highly affordable” information technology system to help contractors track the skills, wage and productivity progression of each cleaner.

This will help firms manage their staff better and work towards meeting the licence-renewal criteria of having all workers trained by next September, said Mr Lim, who was speaking to reporters after demonstrations by three licensed cleaning firms of their productivity initiatives in Jurong and at Nanyang Technological University.

“We hope that it will be ready within the next six months. That is our target,” he said.

Government agencies are looking at making WSQ training “bite-sized” — with shorter durations — so workers need not be absent from work for long periods, said Mr Lim. Training could also be done at cleaners’ workplaces to incorporate training into their daily routine.

This means firms should invest in upgrading cleaners’ skills, instead of “cheap sourcing” — where contractors bid for contracts, offering the lowest prices and subsequently paying cleaners lower wages. Hopefully, this would lead to the public showing cleaners more respect, added Mr Lim.

He said: “(The workers) don’t know the address, don’t want to take the taxi, even though it is paid for.” Having trainers come to cleaners’ worksite will ensure that all are trained, added Mr Palanichamy, whose firm hires 50 cleaners.

However, he pointed out that applying for both the cleaning licence and the Enhanced Clean Mark Accreditation Scheme — which recognises premium cleaning companies — is a costly administrative burden. Given the overlaps between the two schemes, he suggested that Clean Mark-accredited firms be given a licence automatically, without application.